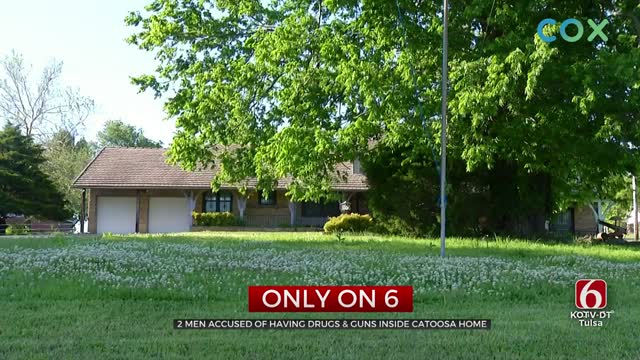 CATOOSA, Okla. - Police arrested two men accused of having drugs in a Catoosa home and suspect prostitution took place inside the house.

Catoosa Police said they found two pounds of meth, heroin, mushrooms, bath salts and guns inside of a home.

They originally went out to the home after getting a tip that Strozier Moore was there- a man who had an arrest warrant in Tulsa County.

"The people he spoke with appeared very nervous. Through their investigation one of the people uttered, ‘well he is actually inside,’" said Catoosa Police Officer Brent Colbert.

The affidavit said while police were looking around the home, they saw someone looking through the blinds at them. They ordered him to come out and when no one did, police said they got permission from the homeowner, Bart Kutt, to kick in the bedroom door. Police said they found Moore inside.

"Right within his reach, they located a pistol that was loaded. They went and got a search warrant and they located an illegal marijuana grow. They also located about 5 to 6 more guns inside the residence. They located two pounds of meth, some heroin, mushrooms, and bath salts," said Colbert. “They located basically a ledger of sorts that had names and I guess that showed what was going on inside of the residence in reference to prostitution."

"This is a residential neighborhood. For us to get that out of there is great," said Colbert.