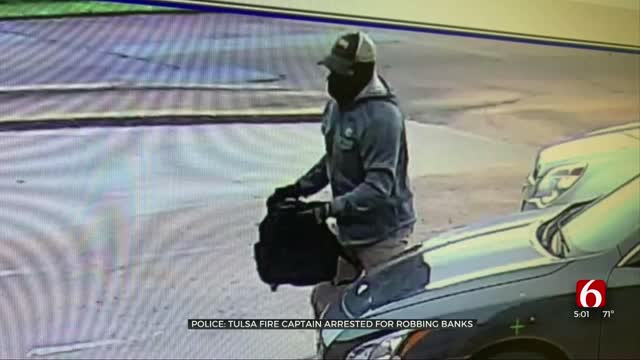 Tulsa Fire Captain Arrested After Being Accused Of 2 Bank Robberies

TULSA, Okla. - A Tulsa Fire Captain is in custody after police say he's being investigated for two bank robberies.

Tulsa Fire Captain Jerry Brown at at the Skiatook Jail with police saying he's expected to be transferred to the Osage County jail soon. They say they arrested Brown after receiving several tips about him being involved in a bank robbery in Skiatook in March. The Tulsa Fire Department confirms Brown is a captain within the department and they say he's been placed on administrative leave.

Skiatook Police released this surveillance picture in March of the man wanted in connection with robbing the OK Capital Bank. They say he didn't have a note or a gun, he just asked for money and left after he got it. Officers say over the past few weeks, they've received several tips from people who know Brown that helped lead to this arrest. Officers say they've been working with the FBI from the beginning of this investigation.

Skiatook Police say Brown is also a suspect in another bank robbery that happened in Sperry on May 7th, but, he has not been arrested or charged in connection with that case. The Fire Department says Brown has worked for the city for 17 years and that the department is fully cooperating with law enforcement on this investigation.