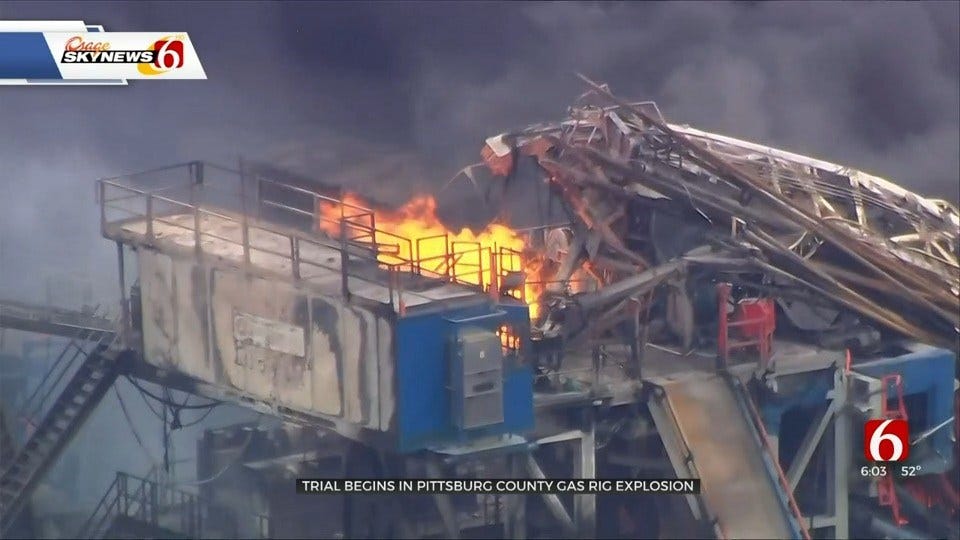 Now a jury will determine if the oil companies managing the rig at the time of the explosion are responsible for the victim’s deaths.

Cody Risk was only 26 when he lost his life in the deadly oil rig explosion in Quinton on January 22nd of 2018.

Risk was one of five victims who was unaccounted for after the explosion.

Before Cody’s death Cody and his three young children were living with family friends, Levi and Cristina Brite.

The Brite’s now have guardianship of Cody’s children and have assumed all legal responsibilities of those children.

Levi Brite and his wife, Christina, are also representatives of Cody’s estate and have filed a wrongful death lawsuit on his behalf because they didn’t believe the company had the safety of employees in mind.

The companies they’ve sued include the rig owner, Red Mountain, and other companies involved in the drilling like Crescent, Patterson UTI, and National Oilwell Varco or Nov.

Red Mountain is the main owner and operator of the rig and the other companies involved helped with staffing and day to day operations.

NOV is the company that supplied the mud and drilling fluids and the technicians to administer them.

They were the main company of focus on the first day of testimony.

The lawsuit said they also helped design the “dog house” at the rig.

The “dog house” is essentially the command post for the rig and it’s the last place the five victims were seen.

The lawsuit alleges Red Mountain began marketing an “Arkoma Basin Company” to investors in hopes of getting more money to drill more wells.

They said the project involved drilling wells into the “Woodford Formation” in Pittsburg County.

The lawsuit said, “not only was Red Mountain aware of these “off-set wells” but relied on those wells to market to investors in the proposed Arkoma Project.”

They said rather than preparing a program with mud weight proven to be safe and effective in other wells, Red Mountain chose a significantly lighter mud weight that was cheaper and ineffective to control the well.

Red Mountain entered into a contract with Crescent to carry out the Arkoma Project.

The lawsuit said an employee named Joel Acosta began engineering the project during the summer of 2017 and started preparing the drilling prognosis.

The prognosis is the plan that includes engineering details of how the well is to be drilled and also specifies the mud weight that needs to be used.

The lawsuit alleges Acosta ignored the heavier mud weight used in dozens of other successful wells drilled into the Woodford Formation in Pittsburg County.

Red Mountain also consulted with other companies like, Halliburton, Newpark Drilling Fluids, Stellar Drilling Fluids and several others on the mud weight.

They said engineers from those companies called for mud weights well above what Red Mountain was including in their prognosis.

The lawsuit goes on to said because they drilled the well with a lighter mud weight, it was unbalanced, which eventually caused the well to blow out.

Sheriff Morris said he heard the call go out on the radio and drove to Quinton immediately. He said he was given a list of names of the people who weren’t accounted for and the five victims’ names were on the list.

The Brite’s attorneys showed the sheriff photos of the dog house and asked if he remembered seeing human remains there that day.

He said he couldn’t see remains in the photos but remembers seeing what looked like a human skull inside the dog house.

The sheriff also talked to an employee shortly after the explosion who told him they were having problems on the rig the day before the explosion.

He then went on to tell the Sheriff, “we should’ve never let them go back up there.”

The Brite’s Attorneys are expected to call the medical examiner to testify later this week along with several other witnesses.

Pittsburg County District Judge Mike Hogan released the jury around 5:00 p.m. on Tuesday night and asked them to return by 8:30 a.m. Wednesday. The trial is expected to last several days.