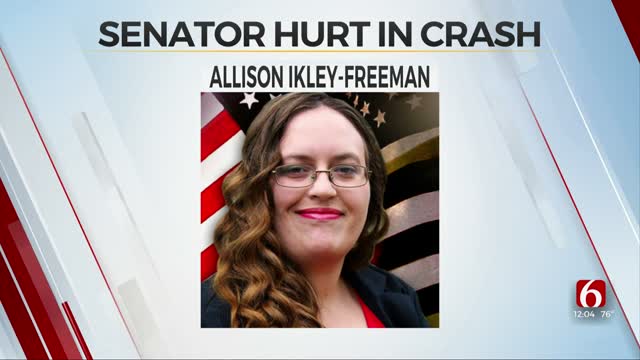 Oklahoma Highway Patrol Troopers said the Turner Turnpike westbound near Stroud was reduced to one lane due to a crash.

Troopers said the crash happened near the Bristow exit just past the turnpike stand between Tulsa and Oklahoma City.

State Senator Allison Ikley-Freeman from Tulsa was injured in the crash. OHP believe one of the vehicles hydroplaned, which caused the crash.

Senate Democratic Leader Kay Floyd said she was taken to OU Medical Center for treatment in Oklahoma City. Floyd said Ikley-Freeman was "returning to the State Capital for session." OHP said 44-year-old Enrique Lopez of Bristow died in the crash.

A representative for Sen. Allison Ikley-Freeman issued the following statement on her behalf:

During her commute to the state Capitol, Sen. Allison Ikley-Freeman was involved in an accident on the Turner Turnpike on Friday, May 22, 2020. She was transported by ambulance to OU Health Center, where she was initially listed in critical condition and underwent surgery. The senator suffered multiple injuries that will require significant recovery. As of this press release, she is being treated in the Intensive Care Unit and listed in serious but stable condition.

Sen. Ikley-Freeman is not available for comment at this time. Her family extends gratitude to her church, volunteers, and fellow legislators in the state Senate and House of Representatives for the support. Her family asks for privacy and prayer for Allison and for the family of the other person involved, who passed away at the scene.