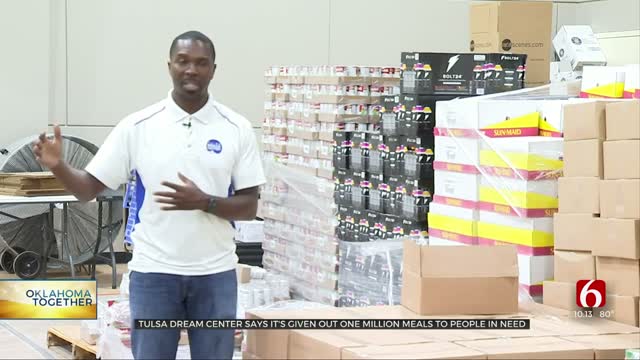 Tulsa Dream Center has handed out more than 1 million meals to people in need.

The Dream Center typically feeds a couple hundred people a week but have seen a huge increase in the number of people in need and say they will continue to help.

The gym at Tulsa Dream Center around 4 p.m. on any given weekday, is usually packed with kids.

"For those people who think that they are invisible, and no one is caring about them, no one sees them, we do see you," said Tulsa Dream Center Program Director Tim Newton.

Now this space has been converted into a makeshift warehouse.

"All this food will be gone by the end of the week because we will be giving it to our partners," said Newton.

The nonprofit usually feeds a couple hundred people a week. Since the pandemic started, they say they have handed out more than one million meals.

"Obviously you assume those with lower to moderate income, but we have people who are coming with nice cars who are saying, 'I am typically doing really well, and I have never been in this type of position before,'" said Newton.

This kind of project takes a village of volunteers packaging and handing out food, a village of people who are donating. The Dream Center says they are using their own funds too.

"We have already spent our year's budget in this pandemic to make it happen," said Newton, "Whether it is Tulsa Public Schools, or the food bank, Go Fresh, Cherokee Nation, just all of these different people coming together to say, 'Hey, let's- feed- people.'"

The Dream Center says they are serving the Tulsa community they are also donating groceries to surrounding communities like Sapulpa, where they say pastors have reached out with specific needs. They say they have also helped people in Arkansas and Kansas.