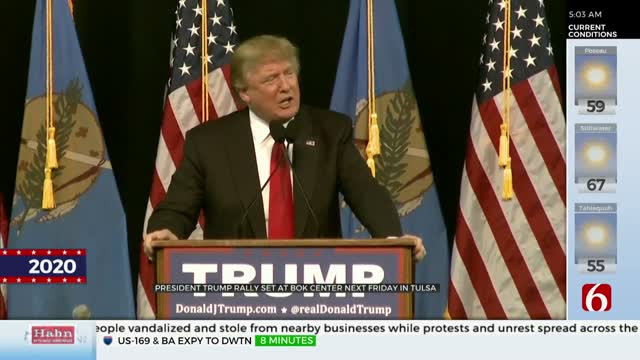 President Trump is returning to the campaign trail next week for the first time since march and his first stop is in Tulsa.

The rally will be held at the BOK Center on Friday, June 19th.

The President says he expects the BOK Center to be packed with people here in the majority red state of Oklahoma.

The rally will be held at 8 p.m. on Friday June 19th, also known as historic Juneteenth.

Although the rally doesn’t begin until 8 p.m., the doors will open at 4 p.m.

Tickets are free but limited to two per mobile phone number and on a first come first serve basis.

In light of the ongoing coronavirus pandemic, there is a disclaimer on the ticket that states if you do get the virus after attending the rally, the president and his event are not at fault.

There will also be several Juneteenth and Black Lives Matter protests scheduled for the same time in the same area of downtown.

The Tulsa Police Department said to expect traffic and road closures throughout the city for the majority of the day because of how many events are taking place.

Republican Primary For Oklahoma State Superintendent Comes Down To 4 Candidates