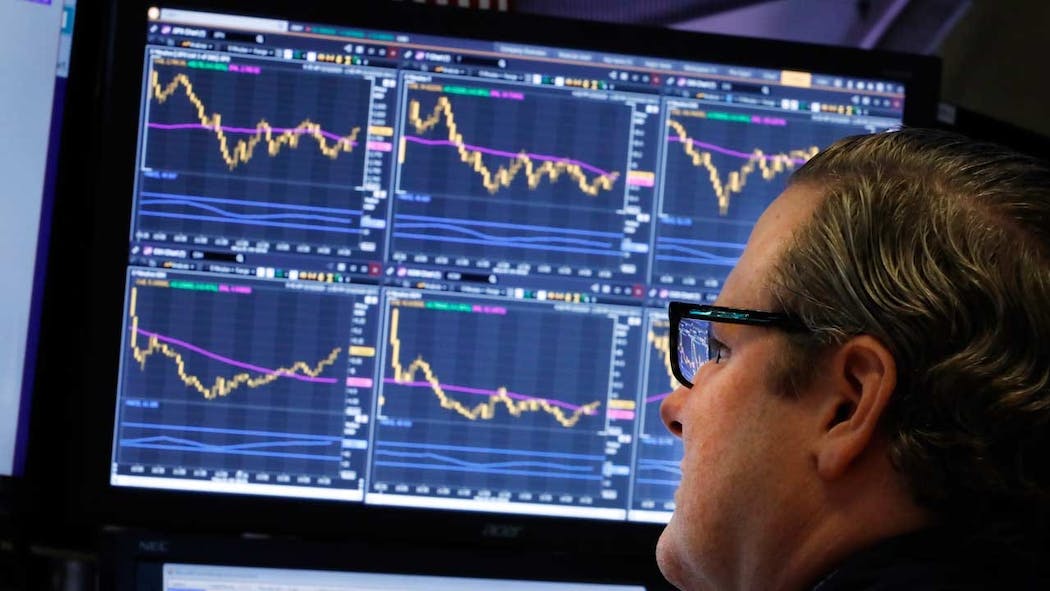 Most U.S. stocks are slipping in early trading on Tuesday, giving back some of their big gains from the past couple weeks.

The S&P 500 was 0.3% lower, as of 9:50 a.m. Eastern time. Stocks were down even more in France, Germany and elsewhere after the European Union’s executive arm said this year’s recession caused by the coronavirus pandemic will be deeper than forecast. It also said next year’s expected rebound could be weaker than expected.

The Dow Jones Industrial Average was down 219 points, or 0.8%, at 26,067, and stocks in Asia also fell following the big rally that swept markets worldwide on Monday.

Big technology stocks were an outlier, though, with Apple, Microsoft, Google’s parent company and other titans holding steady or inching higher. They helped lift the Nasdaq composite up 0.1%, extending its record set a day earlier.

The U.S. stock market has been churning over the last month, with big daily moves up and down keeping it roughly in place. It’s been a small-scale version of the market’s movements since the start of the year, when a nearly 34% plunge on worries about the pandemic-caused recession quickly gave way to a tremendous rally that brought the S&P 500 nearly back to its record level.

Pulling markets higher on one end are reports showing budding improvements in the economy. The job market, retail sales and other economic indicators are all still well below where they were before the pandemic struck. But they’ve stopped plummeting and have begun to grow again as governments relax restrictions meant to slow the spread of the coronavirus.

That’s combined with unprecedented amounts of aid from central banks and governments around the world to prop up markets. It also helped send the S&P 500 up 1.6% on Monday, following up on a 4% rise the prior week, which itself helped cap the best decade for the index since 1998.

But pulling markets lower on the other end are worries that the optimism is overdone. The pandemic isn’t going away, with infection levels worsening across wide swaths of the U.S. South and West, among other global hotspots. The concern is that could keep households and businesses nervous and scare them away from spending. In the worst-case scenario, it could force governments to bring back some of the restrictions that sent the economy into its sudden recession.

Such worries spilled through markets Tuesday after the European Commission unveiled its more dour economic forecasts for 2020 and 2021.

“The road to recovery is still paved with uncertainty,” EU Economy Commissioner Paolo Gentiloni told reporters in Brussels. “This is mostly linked to the epidemiological uncertainty.”

The commission said the joint economy of the 27 nations in the European Union will shrink 8.3% this year, before growing 5.8% in 2021. In the previous forecasts released in May, it had forecast the economy would contract about 7.5% this year and bounce back 6% next year.

Underscoring the fragility, a separate report showed that industrial production in Germany rebounded by less than economists expected in May, and remains far below levels from before the pandemic caused factories to close.

In the U.S. market, airlines and stocks of other companies that most need the economy to get closer to normal had the sharpest losses.

Energy stocks fell even more than the price of oil, which has swung sharply with expectations for the economy’s strength. Devon Energy lost 4.1%, and Occidental Petroleum slipped 3.7%.

On the winning end were the big tech-oriented companies that have been dominating the market for years. Investors have continued to pile into companies they believe are able to grow almost regardless of the economy and whether people are locked in quarantines. Microsoft rose 0.6%, Apple gained 0.5% and Google’s parent company added 0.8%.

The yield on the 10-year Treasury slipped to 0.67% from 0.68% late Monday. It tends to move with investors’ expectations for the economy and inflation.

News On 6 Alan Crone has your morning forecast from the Bob Mills Weather Center.