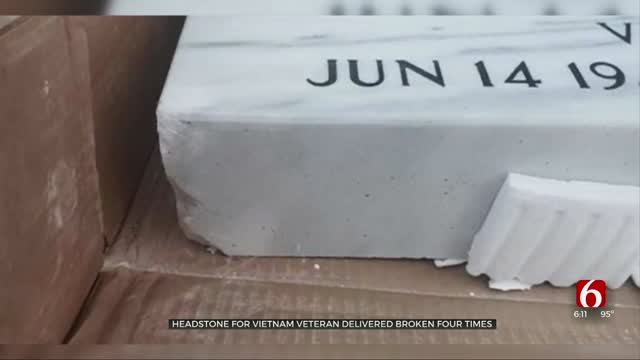 Two Stroud brothers said all they wanted was to honor their father, a Vietnam Veteran, with a proper memorial and headstone. But, after not 1, not 2 or 3, but 4 headstones were delivered broken, they are at the end of their patience.

Doug and Chuck Quinn said when they got the first broken headstone, they were disappointed. The second one they were frustrated. Now, with the third and fourth, they said it is a complete slap in the face.

Their father, Charles Quinn, passed away in October of last year. Since then, his family said they've been fighting what feels like, a never-ending battle. They've ordered 4 veteran headstones to honor their father, and all 4 came broken.

"The way we see it, our dad was the perfect veteran,” said Chuck Quinn, one of Charles’ sons. “We will not settle for anything less than a perfect headstone."

News On 6 talked to the funeral director and she said all four headstones were broken when they showed up to her office.

"For them to be remembered, and the honor they should be receiving, after they are gone, to be treated this way is just unacceptable,” said Doug Quinn.

The Quinn's said their family has 4 generations of combat veterans. To them, this is personal.

"It's hard to even get good closure on it. Not that we will ever forget. But that is part of the memory is to be able to place that memorial out there for him,” said Doug Quinn. "The box is clearly marked as to what it is. It said no double stacking, handle with care."

The Quinn's said their father was a veteran who had a lot of pride and honor in serving his country.

First and foremost, they want a headstone to honor they father, that’s not damaged, but they also want to make sure this doesn't happen to other veterans.

"This is a mission that we felt like we should be on. We are not going to settle for anything less than perfect. Again, not for just my dad but for all veterans,” said Chuck Quinn.

News On 6 has been talking with FedEx and they said they are working on getting this resolved. They said they have called the funeral home twice today.