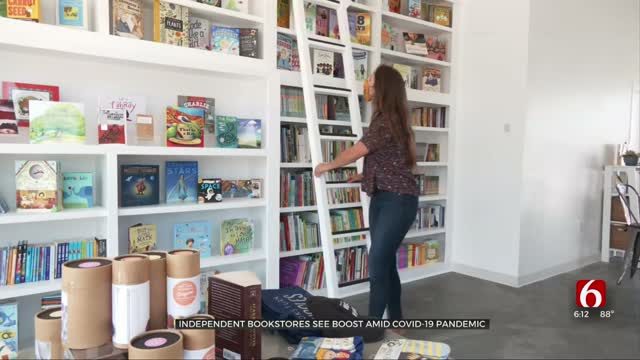 Some independent Tulsa bookstores said they are finding success during the COVID-19 pandemic.

President Jeff Martin said in a post on social media, "We'd be lucky in this environment to be 20, 30, 40% down. But we're not. And there's only one real reason: YOU."

The downtown Tulsa bookstore allows eight people inside the store at a time and a mask is required. Even with the limit on the number of people, they are selling more books.

He said several different things the store is doing are leading to its success. People are taking advantage of solo shopping hours. Customers are also signing up for book subscriptions to be mailed to them and buying a "literary care package" for themselves, or as a gift.

"This was a tremendous success. We have sent out well over 400 of those to, 40, I think, states at this point,” Cawiezell said.

Since it started selling books that address race in ally boxes in June, the owner said they have sold nearly 1,500 boxes.

Eleanor's Bookshop, named after Eleanor Roosevelt, just opened on Friday. The store, located at 11th and Lewis, was offering shopping by appointment only for about a month before that.

"A parent will bring in a five-month-old and they're like, 'This is the first public place he's ever been in his whole life.' And it's like, oh that's so sad, but I'm so glad that it's here. I'm glad that you're here. We want you to be a part of this family and to kind of grow up with the bookstore,” Kelsey McAfee said.

Kelsey and her husband Matt are both teachers, now putting books in front of kids in a new way.

"During this pandemic, I think there's especially been a push to keep local businesses alive, and just a push to read. So that kind of puts us at a good intersection there, to be open for business,” Kelsey said.

One thing all three stores have in common is offering appointment shopping hours.