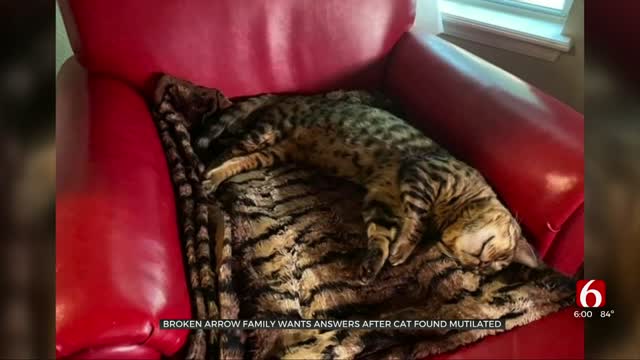 A Broken Arrow Family is devastated and shocked after they found their cat of nine years, cut in half and dumped in front of their home.

The family is now offering a $2,500 reward for any information about what happened to Capone. They said they are they are also scared and believe someone took their cat, gutted him and left him for them to find.

We want to warn you, the photo of the cat is graphic

Josie Saltarelli and her family just want to know why someone would do this to them.

"There were clean cuts. It was obvious that it was mutilation by a human,” said Saltarelli.

"After staring at it for a while I was not wanting to believe it was our cat Capone,” said Sadie McPherson. “It seemed like a direct attack on our family because it was placed right in front of our house. It wasn't done right there. He was taken and brought back."

We talked to Dr. Dan Danner, who has been a veterinarian for 42 years, and sent him the picture of Capone’s fatal injuries.

"The way the cat was laying, this appears to be brutal execution and malicious death. This is totally uncalled for,” Danner said.

Saltarelli said they immediately offered a $500 reward for any information about what happened to Capone. Saltarelli said her neighbors and friends wanted to help and offered another thousand dollars.

"I don't know how anyone could do that to an animal,” said Saltarelli. "The last image we have of him is cut in half and gutted. My 13-year-old daughter had to see that and that is our memory of him, and it's awful."

Broken Arrow police said they are investigating this as an animal cruelty case, which is a felony.

They said they don't believe an animal killed Capone because he was killed somewhere else then dumped in front of their house.