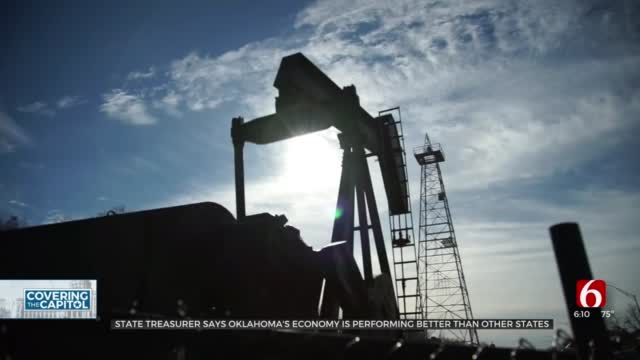 The State Treasurer said Oklahoma’s economy is running on all cylinders. That optimism comes after a monthly financial report puts Oklahoma back in positive territory for tax collections since the COVID-19 pandemic began.

“The bottom line is, Oklahoma’s economy has not only weathered the storm, but it looks very positive going forward,” State Treasurer Randy McDaniel said.

Combined collections over the past 12 months totaled $13.56 billion. That’s a 2.6 percent increase compared to the same period before the pandemic. McDaniel said an open economy, federal stimulus checks and low unemployment have all put Oklahoma's economic health ahead of many other states.

“There’s no doubt by having some optimism that people are looking out for the business owners across the state has made a difference,” the Treasurer said. “Just the fact that they’ve been open, to have been able to have a shorter period of time when they’ve been on the sidelines, I think that’s made a big impact.”

“We really had some slow months when we got down into the $40 million range. To see that and recovery activity that goes with it has been a major boost,” McDaniel said.

“Not only is this month good, we can see the writing on the wall that the next couple of months are going to be good as well,” McDaniel said.

He said as Oklahomans’ lives normalize, the state's economic picture will only get rosier.

“People are ready and they’re ready to get back and engaged in their community,” McDaniel said. “And I think when we do that, the bottom line for us is a better economy and a better Oklahoma.”