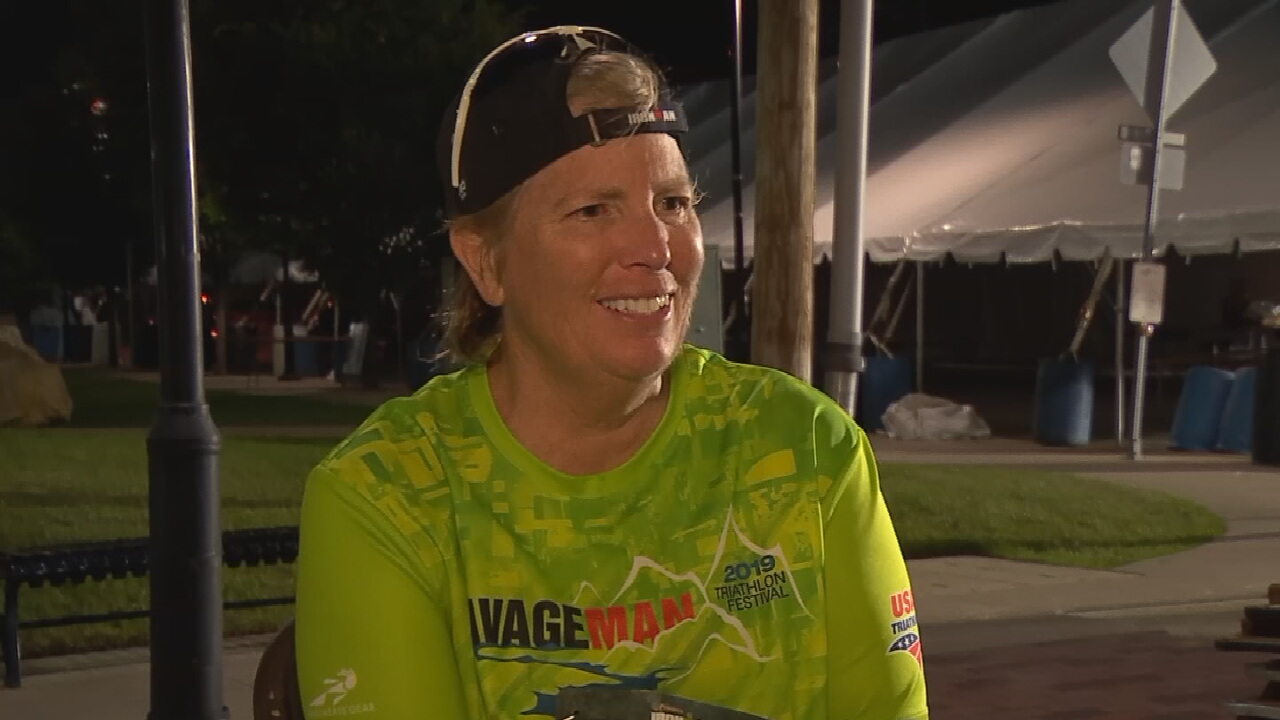 The final Ironman Race athlete crossed the finish line at 4 a.m. on Monday morning as crews were breaking down the race setup and all of the race officials had gone home.

The top ten athletes had completed the race by around 4 p.m. on Sunday afternoon with most people finishing by midnight. The Ironman officials threw a party at the finish line that ended a little after midnight, but nobody realized there was still an athlete who refused to give up.

Early on Monday morning, a woman surrounded by cars and people cheering was running near Heavy Traffic Way in Downtown Tulsa. Upon a closer look, it was clear she was an Ironman athlete that was determined to finish the race.

Sue Richardson is a COVID-19 nurse from Virginia Beach Virginia who came running into the finish line at 4 a.m. Monday morning. At that point, the race officials had gone home, the finish line was disassembled, and the party lights were turned off.

Surrounded by her friends, Richardson started crying walking those last few steps of the 140-mile competition.

“I am exhausted, I’m hungry, I’ve been up over 24 hours, but all in all I feel pretty good, surprisingly good,” Richardson said.

It took her about 22 hours to finish the race. She said she missed the required qualifying time for the biking portion by about five minutes, but that was not going to stop her.

“I was bound and determined,” Richardson said. “Now I can say I’ve completed Ironman Tulsa. I still had the great experience. Isn’t that what life is all about, it’s not about getting the medal, it’s about the experience.”

She said the race is what kept her going through the past year because she was able to turn her motivation, stress, and excitement into a story of perseverance.

“COVID hit and I’m a nurse we were inundated and under so much stress Ironman gives you so much, it’s not just the race it’s a lifestyle, it gets you pumped and motived it gets you excited,” Richardson said. “We had a lot of cases, a lot of people were so incredibly sick from covid, I needed something to work for to be the best I could at work Ironman gives you that.”

Richardson has been doing triathlons since 1995 but said for her, Ironman is not about winning, but about knowing she can push herself to the next level and have the memories.

“When I’m 80 years old on my rockers when I look back on life, I don’t want any regrets so it was worth it,” Richardson tells us.

The Ironman team got word about her early morning finish and confirmed they will be reaching out to her to give her a medal for her completion of the race.

Richardson said she plans on competing in the Ironman competition next year as well and fully expects to get better and better with each race she does.