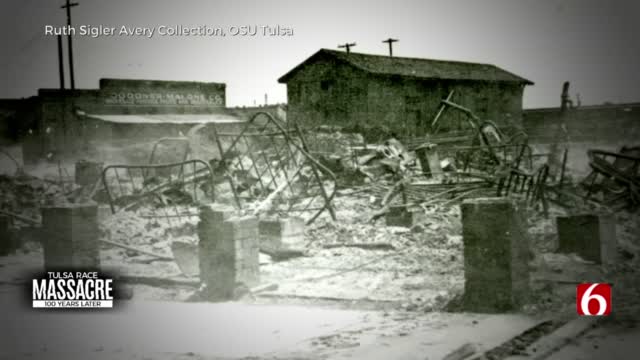 107-year-old Tulsa Race Massacre survivor Viola Fletcher went to Washington, D.C. 100 years after it happened. She told members of congress that the aftershocks of the massacre did not clear when the smoke cleared from Greenwood.

“I still see Black men being shot; Black bodies lying in the street. I still smell smoke. I still see Black businesses being burned. I still hear airplanes flying overhead. I hear screams. I have lived through the massacre every day,” Fletcher said. “My name is Viola Fletcher. I am a survivor of the Tulsa Race Massacre. I am asking my country to acknowledge what happened in Tulsa in 1921.”

Fletcher shared before congress how what happened in 1921 changed everything for her.

“When my family was forced to leave Tulsa, I lost my chance of an education. I never finished school past the 4th grade. I never made much money, and to this day I can barely afford my everyday needs,” Fletcher stated. “I am a 107-year-old and have never seen justice. I pray that one day I will.”

The group sitting before congress explained that there was a case for reparations and that Oklahoma state documents showed some city officials had participated in the massacre. Also, that calling the massacre a riot allowed insurance companies to deny claims from families attempting to get back on their feet again and could not get their money back by going through the courts or insurance companies.

One member of the group testifying before congress explained that reparations include trust funds, a commission to identify victims and their descendants, and direct payments or college scholarships. And they said it was what was roughly provided by congress to the victims of Japanese Internment.

Each Wednesday since September 2018, Reverend Dr. Robert Turner with Vernon AME Church protests at City Hall for reparations for victims of the massacre and their descendants.

Vernon AME Church survived the massacre, but some of its members did not.

Rev. Dr. Turner believes reparations are part of what is needed to move the Tulsa community forward, to move the nation forward.

“How do we value Black lives? How do we respect citizens who were killed at no fault of their own?,” Rev. Dr. Turner asked.

In 2001 after more than three years of research, a group of people commissioned by the Oklahoma State Legislature started presenting their reparation recommendations to local and state leadership.

Those recommendations include direct payments to survivors and their descendants, a scholarship fund, and a memorial for any victim remains found.

Tulsa’s mayor G.T. Bynum said his administration has been working to acknowledge and address disparities that exist in Tulsa but said he can’t justify cash payments.

“I can’t support financially penalizing this generations of Tulsans for something criminals did 100 years ago; especially when you consider you would almost certainly have the descendants of victims being taxed to pay that,” Bynum said.

Viola Fletcher’s younger brother testified alongside her in front of congress and when he finished his speech and asked if he had anything left to say, he reminded his audience that while they all had different histories, upbringings, families, and skin colors, there was a way to move forward: “I appreciate being here, and I hope we can all work together. We are one. We are one.”