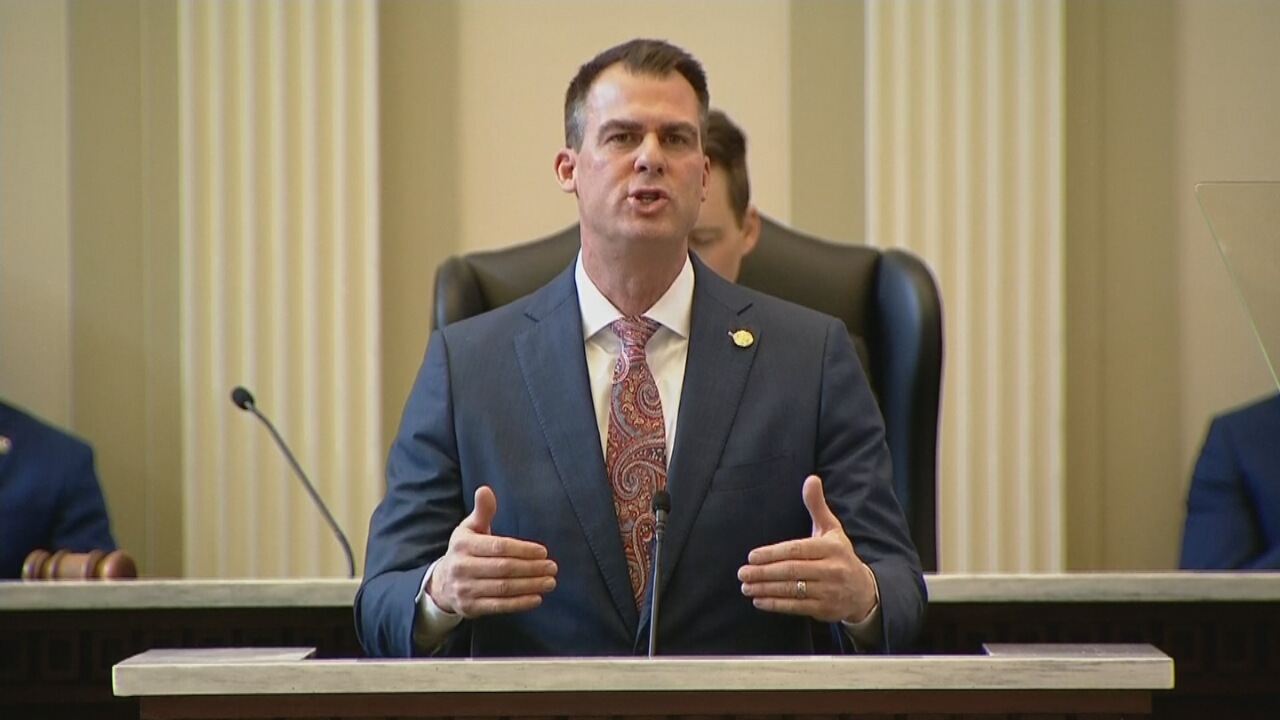 CLICK HERE to read and rewatch the Governor's full speech.

Governor Kevin Stitt delivered his fourth State of the State Address on Monday.

Governor Stitt spoke on many topics including the economy, the McGirt decision, record investments into education, and praised the legislature for providing parents with more choices.

“We modernized our government, and we stood up to defend the rights of Oklahomans including protecting the lives of our unborn children! Today, I am proud to say we are well-positioned to continue our momentum toward becoming a Top Ten state,” Stitt said.

The Governor went on to praise Oklahoma’s legislature’s fiscal responsibility while criticizing Washington and the state of the national economy.

“Inflation is at a forty-year high. Gas and groceries are more expensive. Supply chain issues have made everything harder to find. But if you live in Oklahoma, it’s a different story,” Stitt said.

Stitt touted the state’s unemployment numbers which he claimed at 2.3 percent are the lowest in state history. The governor claims that many are leaving “liberal lockdown states’ for Oklahoma. Stitt also continued his challenge of the Supreme Court’s McGirt ruling which he says “jeopardizes justice”

“I knew then, and I know now, that even a narrow Supreme Court ruling can fundamentally change a state. Oklahoma has been robbed of the authority to prosecute crimes. Put simply, McGirt jeopardizes justice. Over the past year, we’ve done everything we can to protect law and order and limit the impacts of this decision. Our broad coalition includes Attorney General John O’Connor; all 27 district attorneys across the state, especially Steve Kunzweiler in Tulsa County and Matt Ballard in Craig, Mayes, and Rogers Counties; Police Chiefs like Wendell Franklin in Tulsa, the Oklahoma Sheriffs’ Association; the Oklahoma Farm Bureau; the Oklahoma Cattlemen’s Association; environmentalists; The Petroleum Alliance of Oklahoma, and city leaders.

Stitt went on to lay out his road map for the next year which he says has four key checkpoints.

1. Driving hope for all Oklahomans

2. Protecting Oklahomans and our way of life

3. Making Oklahoma the most business-friendly state in the country

Delivering taxpayers more for their money.

Stitt pledged to support any legislation that gives parents more choice in school saying that in Oklahoma "We need to fund students, not systems." He also said he is proposing to match funds so that the "best" teachers can make six-figure salaries in Oklahoma.

put our students first. Our school transportation formula is outdated and broken. We desperately need to modernize it," Stitt said. Right now, some talented teachers choose to leave the classroom to make more money as an administrator. Oklahoma students can’t be the best without the best teachers. That’s why I’m proposing matching funds so that our best teachers can make six-figure salaries and stay in the classroom. It’s the right thing to do for our teachers and for our kids."

Stitt took aim at teacher unions, saying that they push Critical Race Theory and school closures. Stitt claimed that the unions " intimidate new teachers" into giving away part of their salaries.

"Liberal unions want to keep a stranglehold on their cut of teacher pay. Enough is enough," he said.

Stitt closed out his speech by reiterating his goal of making Oklahoma a Top 10 State.

"We must never lose sight of the fact that Oklahomans elected us as leaders. They sent us here to protect their rights and to make sure everyone in our state has an equal opportunity to succeed. Just because your life is fine, or your school is great, or your business is thriving, doesn’t mean we don’t have an obligation to make sure everyone has that same chance. We’re all here because we have a higher calling to do what’s right, not what’s easy. I truly believe Oklahoma can be and will be, a Top Ten state" Stitt said.