Huge Invasive Spiders From Asia Could Spread To Much Of US East Coast, Scientists Say 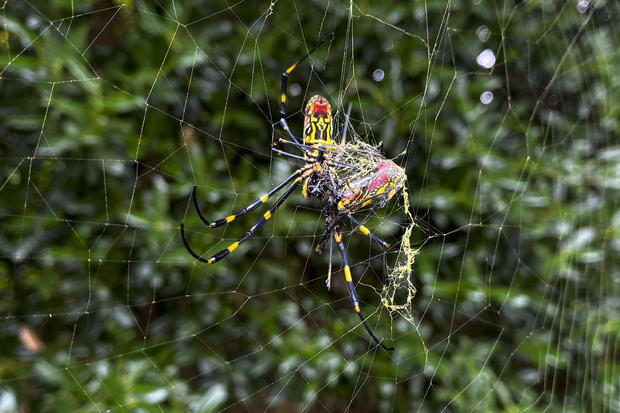 Researchers say a large spider native to East Asia that proliferated in Georgia last year could spread to much of the East Coast.

The Joro spider's golden web took over yards all over north Georgia in 2021, unnerving some residents. Millions of the large spiders spun three-dimensional golden webs in dozens of counties, according to the University of Georgia.

The spider was also spotted in South Carolina, and entomologists expected it to spread throughout the Southeast.

A new study suggests it could spread even farther than that. The Joro appears better suited to colder temperatures than a related species, researchers at the University of Georgia said in a paper published last month.

It has about double the metabolism, a 77% higher heart rate and can survive a brief freeze that kills off its relatives, the study found.

The researchers also noted that Joros are found in much of Japan, which has a similar climate to the U.S.

"Just by looking at that, it looks like the Joros could probably survive throughout most of the Eastern seaboard here, which is pretty sobering," study co-author Andy Davis said in a statement.

The Joro - Trichonephila clavata - is part of a group of spiders known as orb weavers for their highly organized, wheel-shaped webs. Joro females have colorful yellow, blue and red markings on their bodies and can measure three inches across when their legs are fully extended.

It's not clear exactly how and when the first Joro spider arrived in the U.S. or why they were so abundant in Georgia last year. WGCL-TV reported it is believed the spiders arrived in a shipping container that was dropped off somewhere along Interstate 85 in Georgia. They were first identified in the state in 2014 by Rick Hoebeke with the Georgia Museum of Natural History.

Their impact on native species and the environment is also not clear, though some researchers believe they are benign.

Nancy Hinkle, an entomologist at the University of Georgia, said Joros help suppress mosquitoes and biting flies and are one of the few spiders that will catch and eat brown marmorated stink bugs, which are serious pests to many crops.

"This is wonderful. This is exciting. Spiders are our friends," she said. "They are out there catching all the pests we don't want around our home."

Ann Rypstra, who studies spider behavior at Miami University, was more cautious in her assessment of the Jora's potential impacts, saying more research was needed.

"I'd always err on the side of caution when you have something that establishes itself where it's not supposed to be," she said.

Huge Invasive Spiders From Asia Could Spread To Much Of US East Coast, Scientists Say