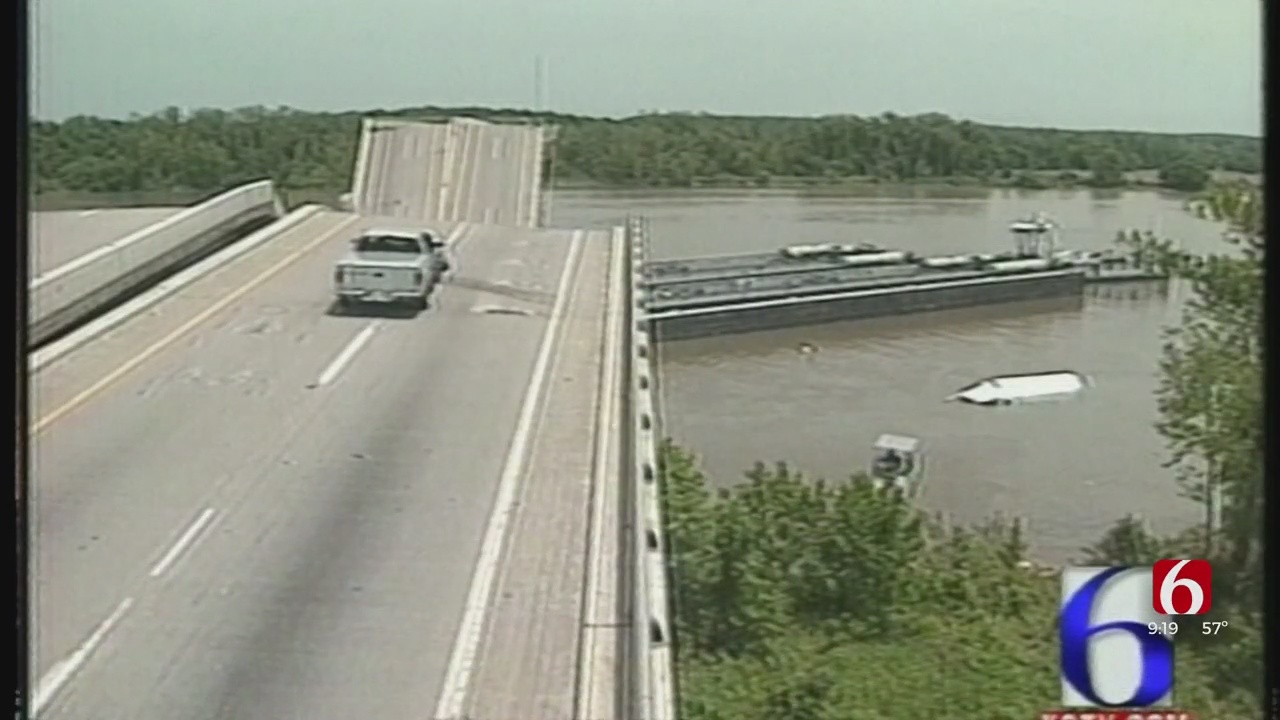 May 26 marks 20 years since a tugboat hauling two barges slammed into the Interstate 40 (I-40) bridge over the Arkansas River.

The bridge collapse and the nearby town of Webbers Falls were the focus of international news coverage over that Memorial Day weekend.

The towboat Robert Y. Love slammed into Pier 3 of the Interstate 40 bridge, just downstream of Webbers Falls at 7:45 in the morning. 500 feet of the bridge came crashing on to the barges below.

The captain that day was Joe Dedmon. A National Transportation Safety Board report shows he lost consciousness, possibly because of an abnormal heart rhythm, while he was piloting the ship. It is estimated Dedmon was unconscious for several minutes.

When Dedmon woke up, he said he remembered seeing a vehicle plunging off the edge of the broken bridge and sounding an alarm.

It is hard to find video from May 26, 2002, without seeing a silver Dodge Dakota that did not go off the edge. Max and Goldie Alley were in that truck.

In an interview just a month before she died, Goldie Alley told Dave Davis she and her husband were on their way to Arkoma when the bridge collapsed in front of them.

﻿Despite a broken back, broken rib and punctured lung between them, Max survived and preached regularly for another ten years. Goldie passed away in October 2021.

"We stood there and watched the traffic go in that water,” Alley recalled. “And I said, 'We’ve got to do something.'” She remembers Max saying, “Goldie, we can pray."

The NTSB determined 11 vehicles with 19 people inside went off the bridge. 14 people died, most of them drowned.

In his decades of service in the Navy, as the current Verdigris police chief and as a firefighter in Muskogee, Jack Shackelford said he has still never seen anything like the bridge disaster.

20 years later, Shackelford remembers the smallest details from those days he spent on the scene. Someone he could never forget is the youngest victim, 3-year-old Shea Johnson.

"I actually picked her up off the airboat and put her in the body bag and carried her up to where they had a temporary morgue set up," Shackleford said. "It was pretty hard. It was hard because I had a daughter at that time that was about 3 years old and it kind of hit home"

Jewell Horne-Hall was Webbers Falls' Mayor in 2002. She lobbied for funding for a memorial and still organizes annual reunions. She said when disasters happen, the town looks to a higher power.

"We have God with us,” Horne-Hall said. “He's with us and He strengthens us for whatever comes our way."

No one was ever charged with a crime for the I-40 bridge collapse. There were lawsuits which were settled.

Some still are not sure if justice has been served.

"It’s really hard for me to say because I really don’t understand why it happened or how it happened, Horne-Hall said. “We had this barge traffic going through here and never had anything like this."

"How can you put a price on people’s lives?” Shackelford asked. “An accident’s an accident. Being in this business, you deal with accidents all the time."

Before she died, Goldie Alley would tell anyone who asked about how she believed God saved her and her husband that day. The terrifying ordeal taught her a lesson that she carried with her until the end.

"You better pray before that happens,” said Alley. “That happened so fast, your life changes... like, so fast."