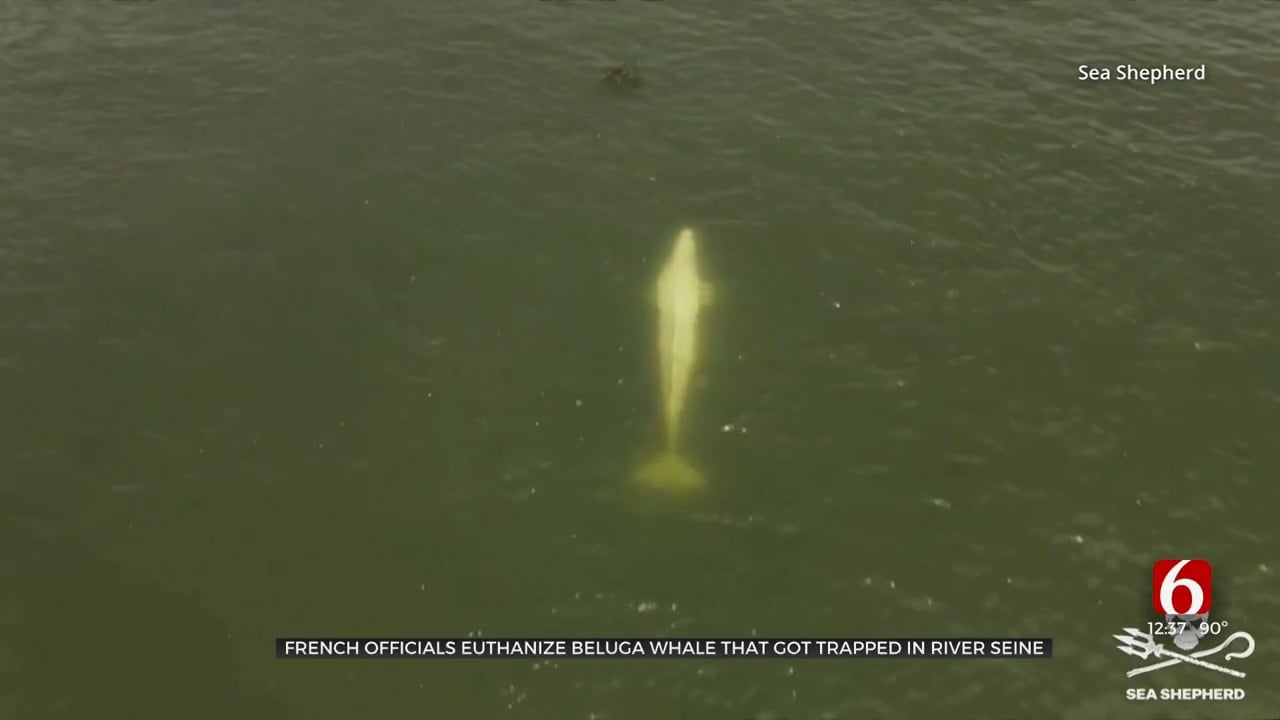 A beluga whale stranded in the Seine river in northern France for more than a week was removed from the water early Wednesday in a risky rescue operation, but officials said the animal died as it was driven in a refrigerated truck back toward the coast.

"Despite an unprecedented rescue operation we must announce with sadness that the cetacean has died," the authorities in the Normandy region of Calvados tweeted, adding that the whale had to be put down during transport.

After nearly six hours of work by dozens of divers and rescuers, the 1,800-pound whale was lifted from the river by a net and crane at around 4:00 a.m. (10 p.m. Eastern) and placed on a barge under the immediate care of a dozen veterinarians.

The beluga, a protected species usually found in cold Arctic waters, was then given a health check and driven in a refrigerated truck toward the coastal town of Ouistreham. The plan had been to then place the beluga in a seawater lock where it could be held for observation for several days before being released into the open sea. But officials in Eure, where the beluga was stranded, said the whale was worryingly thin and in bad shape when it was lifted out of the river.

"It bodes, according to veterinarians, for a poor vital prognosis," the Eure prefecture said in a statement after the first stage of the rescue operation, which it said was "particularly complex."

The 13-foot whale was spotted more than a week ago heading toward Paris and was stranded about 81 miles inland from the Channel at Saint-Pierre-la-Garenne in Normandy.

Since Friday, the animal's movement inland had been blocked by a lock at Saint-Pierre-la-Garenne, 44 miles northwest of Paris, and its health deteriorated as it refused to eat.

Isabelle Dorliat-Pouzet, secretary general of the Eure prefecture, said earlier that medical tests would be carried out before transporting the whale. "He is a male, that he is very underweight and that he has a few sores," she said.

The animal's rescue was quickly hailed early Wednesday when it was taken out of the river after a nail-biting few days.

"Today is a great day for this beluga whale and for everyone involved in its rescue," conservation group Sea Shepherd said on its website. But the operation to return it to the sea was never without huge risks, said Isabelle Brasseur of the Marineland sea animal park in southern France, part of a Marineland team sent to assist with the rescue.

"It could be that he dies now, during the handling, during the journey or at point B," in Ouistreham, she told AFP on Tuesday before the animal was loaded carefully into the truck.

The 24 divers involved in the operation and the rescuers handling the ropes had to try several times between 10:00 pm and 4:00 am to lure the animal into the nets to be lifted out of the water.

As preparations for the operation got under way, people gathered along the banks of the river to observe.

Interest in the beluga's fate had spread far beyond France, generating a large influx of financial donations and other aid from conservation groups as well as individuals, officials said.

While belugas migrate south in the autumn to feed as ice forms in their native Arctic waters, they rarely venture so far.

According to France's Pelagis Observatory, which specialises in sea mammals, the nearest beluga population is off the Svalbard archipelago, north of Norway, some 1,800 miles from the Seine.

The trapped whale was only the second beluga ever sighted in France. The first was pulled out of the Loire estuary in a fisherman's net in 1948.