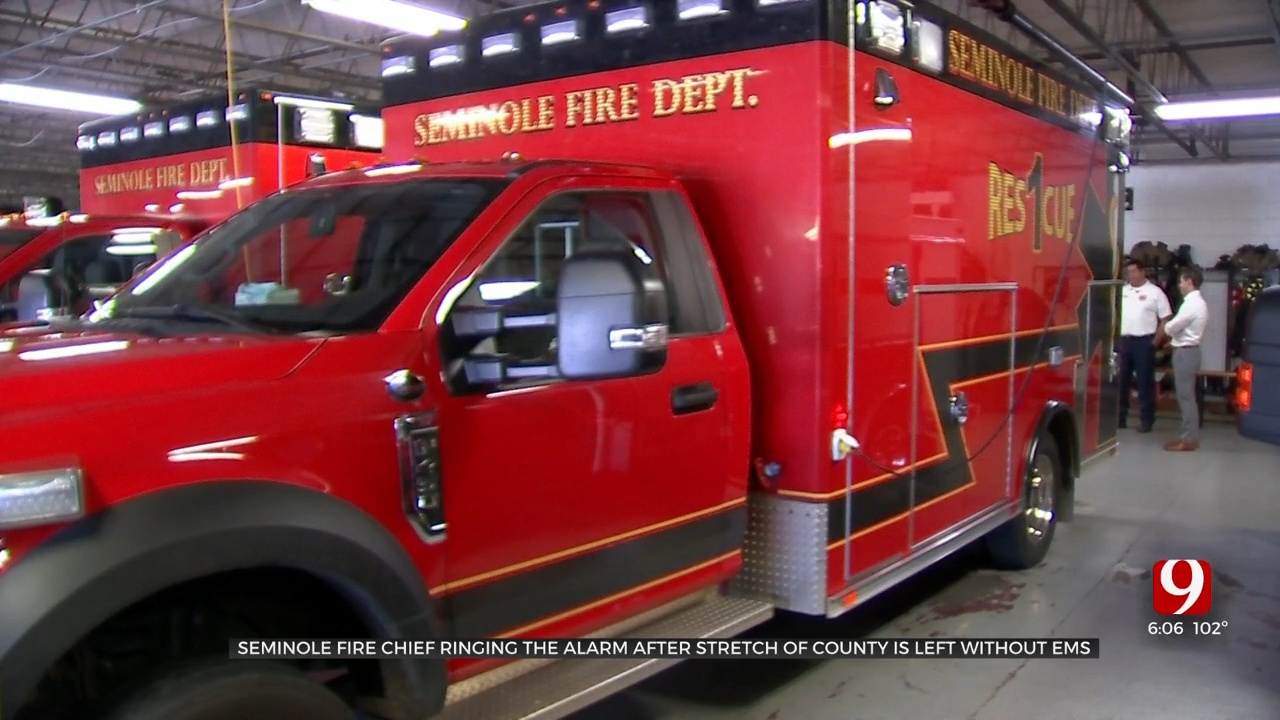 A stretch of Seminole County isn’t covered by ambulance services and the Seminole Fire and EMS Chief said he’s sounding the alarm.

Voters said yes to a proposition that equally splits a portion of the one quarter sales tax between 3 services. Those services are Konowa, Wewoka and Seminole.

What the districting did not address was a 50 square mile area along I-40 in northern Seminole County.

An EMS service called React used to cover it, but when React pulled out, the area became no man’s land.

Seminole Fire and EMS now say it is feeling the strain trying to fill the void.

Chief Fielding Lucas says he’s been talking about the issue for two years.

“I saw kind of the writing on the wall,” he said. “Catfish Roundup, The Seminole Nation Casino,The Strother school. I mean I-40 alone there is 20,000 people that travel that road a day.”

He is concerned those people could wait a long time in the case of an emergency.

“It’s devastating for us because we’ve been screaming from the top of a mountain.”

Chairman of the Board of County Commissioners, Russell Yott, said that’s not the case.

“I'd like to see the issue resolved,” says Yott. “But like I said I hadn't heard from them in at least 9 months.”

The County Commissioners are tasked with overseeing ambulance services.

Yott says the last he heard; Miller EMS in Prague would cover the area. He also says adding another ambulance would likely mean increasing taxes. He doesn’t think voters would go for it.

“We need more ambulance service in the county and more hands, but the problem is getting it. You got to have money,” he says.

“We have a low population. We have low sales tax, hardly any money for anything really,” says Yott.

Chief Lucas still believes there is a solution out there, but no decisions are being made.

He says one solution could be redrawing the service districts. Seminole would move to cover the northern part of the county while Konawa splits the southern end.

Commissioner Yott says that proposal was rejected by the City of Maud fearing slower response times for its citizens.

Meanwhile, Chief Fielding says they are stretched thin and those in the uncovered area are suffering due to long waits on ambulances.

“I feel like they’re taking advantage of our generosity and our kindness,” claims Lucas. “[They] know that we’ll respond because that’s what we do. We always respond.”