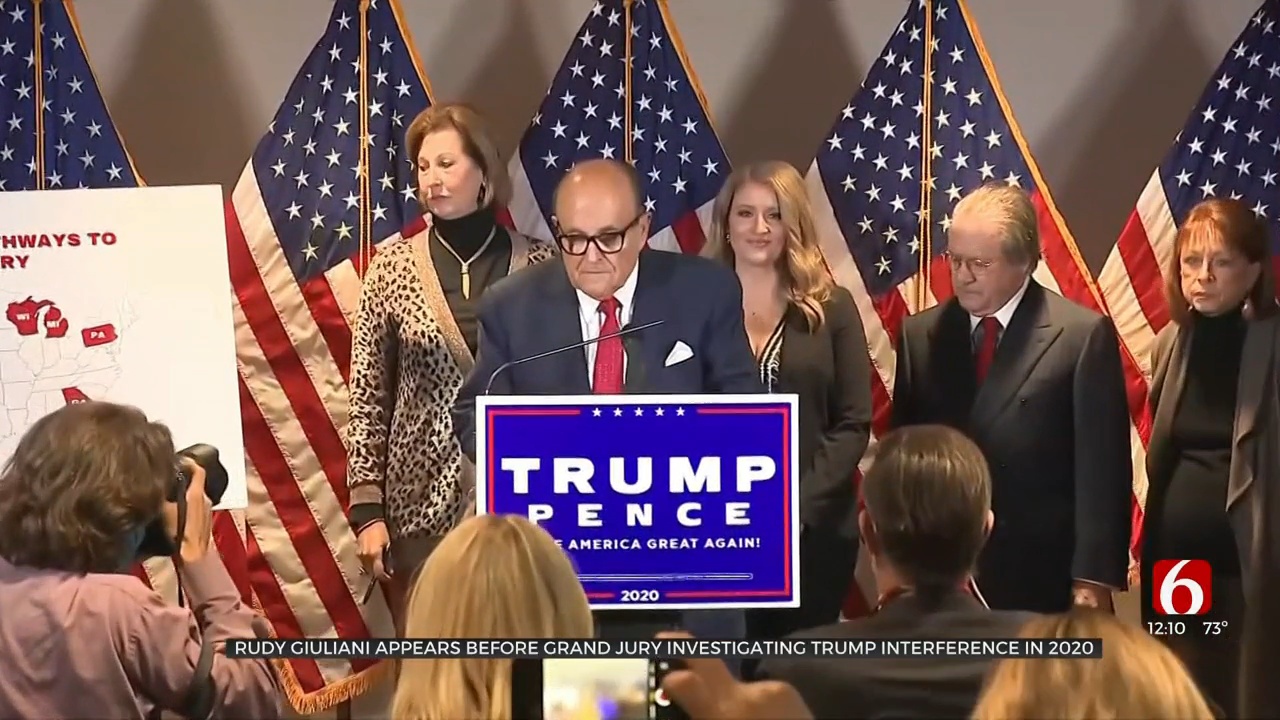 Rudy Giuliani is appearing Wednesday before a grand jury conducting a criminal investigation of the conduct of former President Donald Trump and some of his supporters following the 2020 election.

Giuliani, who was Trump's personal attorney in 2020, is a target of the Fulton County probe examining whether the former president interfered in Georgia's 2020 elections, according to one of Giuliani's lawyers.

Fulton County Superior Court Judge Judge Robert McBurney on Aug. 9 ordered Giuliani to make the trip to Atlanta "on train or a bus or Uber," after his attorneys sought to postpone the testimony, citing two notes written by a doctor advising Giuliani not to fly following an early-summer heart stent operation. Giuliani resides in New York City, where he was mayor from 1994 through 2001.

Giuliani arrived at the Fulton County Courthouse on Wednesday at about 8:30, half an hour before his scheduled appearance.

Asked about his method of travel to Atlanta, Giuliani replied, "I'll tell you one thing, I didn't walk." Giuliani is among a growing contingent of Trump allies identified as targets of the investigation, including 16 Georgia Republicans who falsely claimed to be the state's "duly elected and qualified" electors after Trump lost.

Giuliani has been described in court documents as a "material witness" in the case. But on Monday, a Fulton County prosecutor informed one of his attorneys, Bill Thomas, that Giuliani is now considered a target of the investigation.

At the hearing on Aug. 9, Thomas complained that prosecutors had not yet said whether Giuliani was a target. Thomas indicated it "will dictate certainly how counsel addresses this matter with [Giuliani]."

Bob Costello, a New York-based attorney for Giuliani who is in Atlanta for the hearing, declined Tuesday to describe how that new designation might impact Giuliani's approach to the hearing.

Giuliani was among Trump's closest advisers in the aftermath of the 2020 presidential election. Giuliani testified at a December 2020 Georgia State Senate hearing, making unfounded claims of fraud and misconduct among state elections officials.

The special grand jury was empaneled in January at Fulton County District Attorney Fani Willis's request. She indicated that the investigation was spurred by a Jan. 2, 2021, phone call between Trump and Secretary of State Brad Raffensperger. Trump told Raffensperger on the call, "I just want to find 11,780 votes," referring to the number needed for Trump to win the state.

Raffensperger is among dozens of state officials and Trump associates who have been subpoenaed since May.

Also subpoenaed in the case is South Carolina Sen. Lindsey Graham, a Trump ally who called Raffensperger twice after the election. A federal judge on Monday denied Graham's motion to quash the subpoena, and ordered him to appear before the special grand jury on Aug. 23.

Graham said he would appeal.