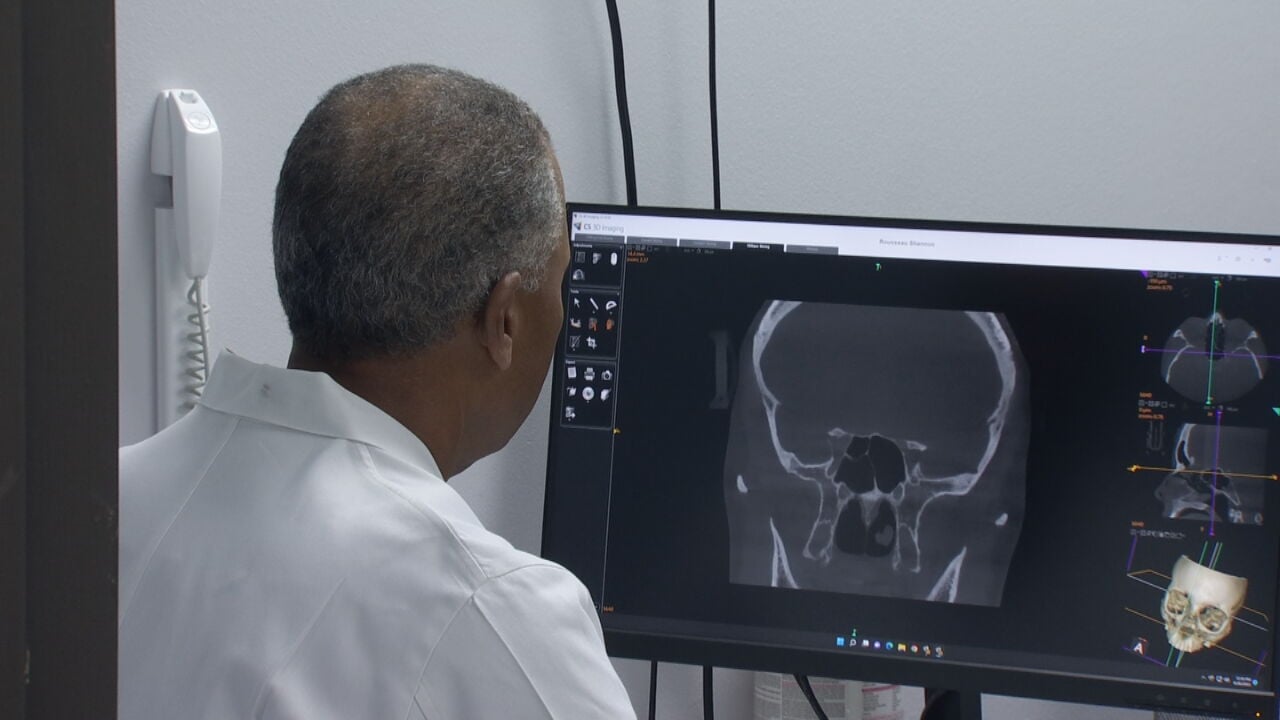 An estimated 40,000,000 Americans suffer from migraines. It’s considered the sixth-most disabling disease in the world, forcing 9 out of 10 people unable to work or perform daily activities while having an attack. The problem is so severe that it costs the U.S. economy about $36 billion a year in healthcare costs and lost productivity.

Most patients are treated with medications like Qulipta, Nurtec, or Emgality. Some receive Botox injections to alleviate the pain along with acupuncture and massages.

While these options work for some, it doesn’t help everyone, including Danielle Robinson from McAlester, Oklahoma.

Danielle is a mother in her 30s with two young children. She’s had migraines for more than 20 years. They started when she was just 2 years old, but she wasn’t officially diagnosed until she turned 9.

“It was very debilitating. I missed out on so many activities. [I spent] a lot of the time on the couch or in bed just being in pain,” Danielle said.

Migraines are an invisible disability, and the pain can be excruciating. Besides severe head pain, many report feeling dizzy, nauseous, a sensitivity to light and sound, and even losing feeling in their arms and legs. The sensations can last for days, even weeks on end.

"Mine would always start in the back of my left eye and the pain would just throb throughout my head,” said Danielle. The problem got worse as she aged. She saw countless doctors who put her on anything and everything. “I did Botox, acupuncture, I had a neuro stimulator (a device implanted in the head), several surgeries like a hysterectomy, but nothing was working.”

During one migraine attack, her pain became so unbearable that she ended up in the ER. Doctors ultimately admitted her to a hospital for four days to try and help her.

“My mom started a prayer chain at church and said, 'I got everyone praying for you.' I told her, 'Stop. I'm praying for God to take me out of this world. I can't do this anymore; I can't live with this pain every day.’ At that point I had just checked out.”

Just after that, as fate would have it, she came across a video of a Dr. Kevin Smith from Houston, Texas. He offered relief from migraines by using a procedure he calls the “Smith Sinus Migraine Technique,” which has a patent pending.

Danielle booked an appointment to see him and quickly found herself in Houston where he made her a promise: he could cure her migraines.

“I laughed at him and said, ‘You can't cure my migraines. I've been told all my life migraines are incurable,'" she said.

"People need to know there is a cure for these migraines,” said Dr. Kevin Smith, a plastic surgeon and ENT. That bold statement comes after 30 years in the medical field. “First of all, you must understand the correlation between the septum and the migraines, and there's a lot of doctors that just don't. They just don't understand that."

Doctor Smith said he first noticed the connection between migraines and the nose during his Facial Plastic Surgery Fellowship at the McCollough Plastic Surgery Clinic in Alabama.

Some patients with bad headaches told him they felt better after having nasal surgery.

"But it wasn't until about 8 years ago (2014) that I made the connection from just headaches or chronic headaches to actually make that leap and go, 'No, this is really the root cause of migraines,'" Dr. Smith said.

He said migraines are caused by specific abnormalities in the nose and sinuses, which stem from an injury or trauma like a deviated septum.

Bone spurs that grow out of a deviated septum can also cause intense head pressure, according to Dr. Smith.

He adds that the nose is like the gatekeeper for the rest of the body. “It needs to be very sensitive because it needs to pick up on these subtle changes that might be going on in the environment so that you can protect yourself. That's one of the basic things about it, which is why it has so many nerves.”

His longest sufferer was a 79-year-old woman who came to see him in 2019. It was her first surgery after having migraines for 60 years. And she’s not alone in her suffering. Doctor Smith said most patients suffer 20-30 years before they see him.

He said his procedure is different than other surgeries, including those for a deviated septum, because it has a “more detailed analysis of the septum,” like where it touches the sensitive tissues in the nose.

He also said no matter the type of migraine, he can help. “Migraines are named after their triggers: silent migraines, ocular, vestibular, hormonal, hereditary, occipital. All of them are caused by this one root cause in the nose and sinuses."

Despite his findings, Doctor Smith said most doctors aren’t convinced. Med school students are taught that migraines are in the brain.

However, he said only 5% of all brain scans done on migraine patients can explain the pain, like an abscess or tumor. For the other 95%, he said he can help patients find relief and get their life back.

"Over 90% of the patients that I operate on don't have another migraine ever. You might get a headache that you take Tylenol for, that kind of thing, but as far as these debilitating migraines you're not going to have that,” Dr. Smith said.

That brings us back to Danielle. She had her surgery in June 2020 and just celebrated two years of being migraine-free. Not only that, but she also said it marked a celebration of her life starting over.

"Hands down Dr. Smith saved my life because I'm not going to lie, I was a little skeptical, but seeing I'm living proof it did work. I just feel like a brand-new person. I'm still in shock it's been this long and I'm migraine free,” Danielle said.

Doctor Smith said he's previously submitted research to the ENT Journal, but they rejected it without any explanation. He's now in the process of putting his case reports together and hopes to partner with a healthcare corporation to get funding for even more research.

He said that he has two long-term goals. The first is to create a course where surgeons can learn how to perform his "Smith Sinus Migraine Technique” and can get certified in it. The second is to establish different offices under his name across the United States.