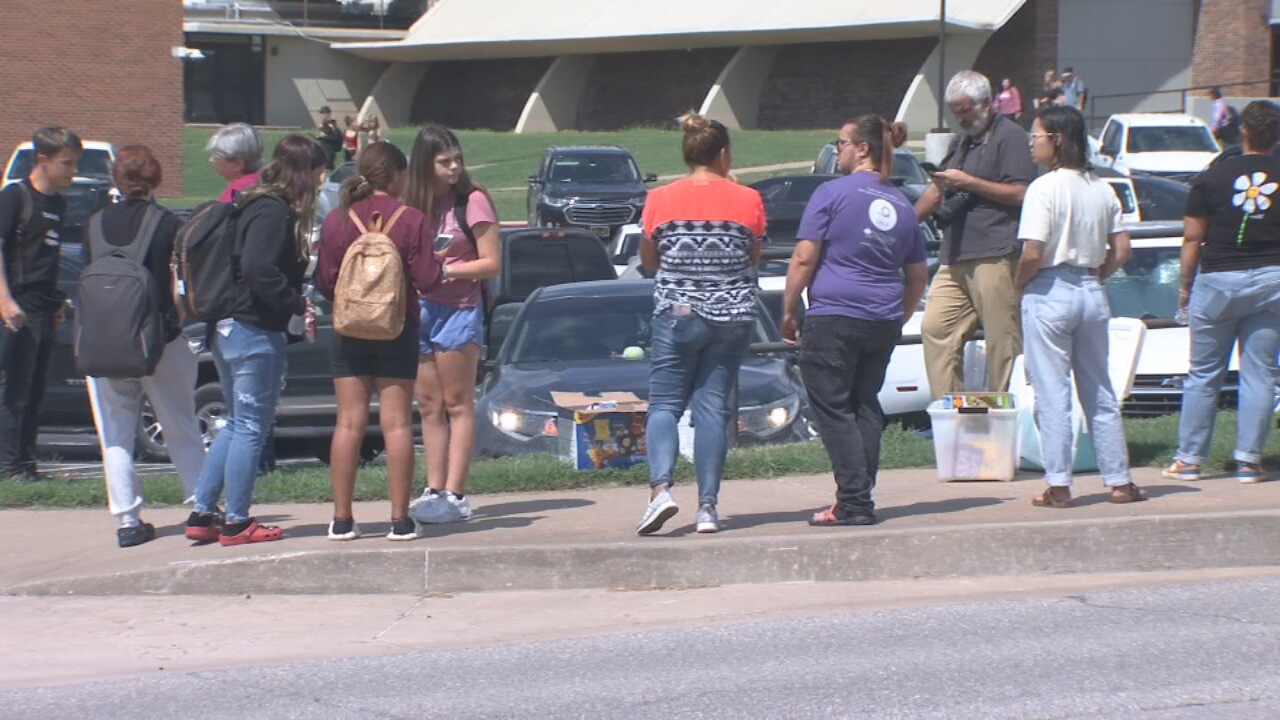 Sand Springs Students Walkout for Second Time in a Week

Some high school students in Sand Springs walked out on Wednesday for the second time in a week.

Those students said they wanted to bring attention to what they see as bullying and racist issues at their school. Fewer than 10 students were involved in the walkout on Wednesday, and one student said there would have been more, but said they were threatened with detention if they walked out. The district said students who walked out were given an unexcused absence.

A small group of students, one parent, and other adults gathered outside Charles Page High School and stood on the sidewalk during lunch hour.

Vanessah and her mother, Jessica, helped organize the event for the second walkout at the high school this year.

"I don't think you should judge somebody off their appearance. Cause we're all the same at the end of the day,” Vanessah said.

"I am here to support my child. Her ultimate goal in life is to make bullying and racism a thing of the past,” Jessica said.

Students at the walkout said two recent issues are concerning: one, they said, was about racist comments made from one student to another, that were then spread on social media. In a separate incident, students said "white privilege" cards were reportedly circulating among some white students. Vanessah said she would like to see stronger consequences against students involved in these issues.

"I just don't feel like racism and bullying is being taken care of how it should be and I feel like too many people are getting away with it, with no punishment,” Vanessah said.

Jessica said more students would have shown up to the walkout but believes students were told they would get detention if they walked out on Wednesday.

“They tell them that if they walk out the doors, they get detention, which deterred a lot of kids from not coming outside,” Jessica said. "She called me and said, 'Mom, they're threatening everybody so now kids aren't coming.'"

In a statement, the district said students who walked out were marked for an unexcused absence.

The district said it also encourages students to speak with a counselor or administrator about these recent issues, and report any bullying or harassment they see.

The district released the following statement:

Students who wish to discuss the recent events are encouraged to speak with their counselors and school administrators. Our experience tells us problems are effectively solved by engaging in open dialogue. Our lines of communication are always open, and we want to hear what students have to say.

Our mission to educate our students is unwavering, and the best place for our students to learn is in the classroom. Additionally, continued walkouts would create a safety issue. Our buildings at every site remain locked during the school day, and it is a challenge to maintain secure entrances when students choose to leave the building during class. As such, students who choose to walk out will be required to check back into the office for a pass to return to class.

Students who choose to walk out during the school day are counted absent for the class(es) they miss. These absences are unexcused. The district informed parents and students of this prior to the September 7 walkout.

We continue to ask that parents, family members, and students who know of any bullying or harassment report it to school administrators as soon as they learn about it. This enables us to address problems as they arise. If you do not feel comfortable coming forward in person, please make an anonymous report using STOPit: appweb.stopitsolutions.com/directory.

To learn more about our Bullying & Harassment policy, visit sandites.org/page/bullying-harassment.