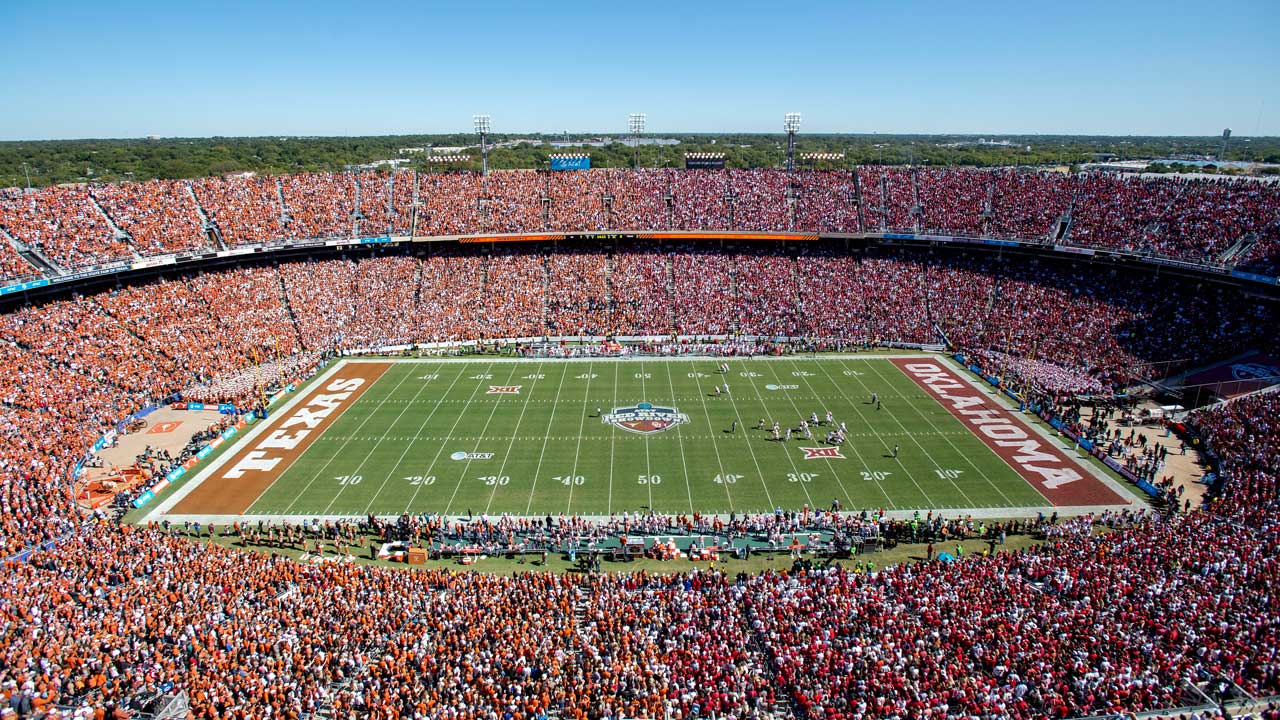 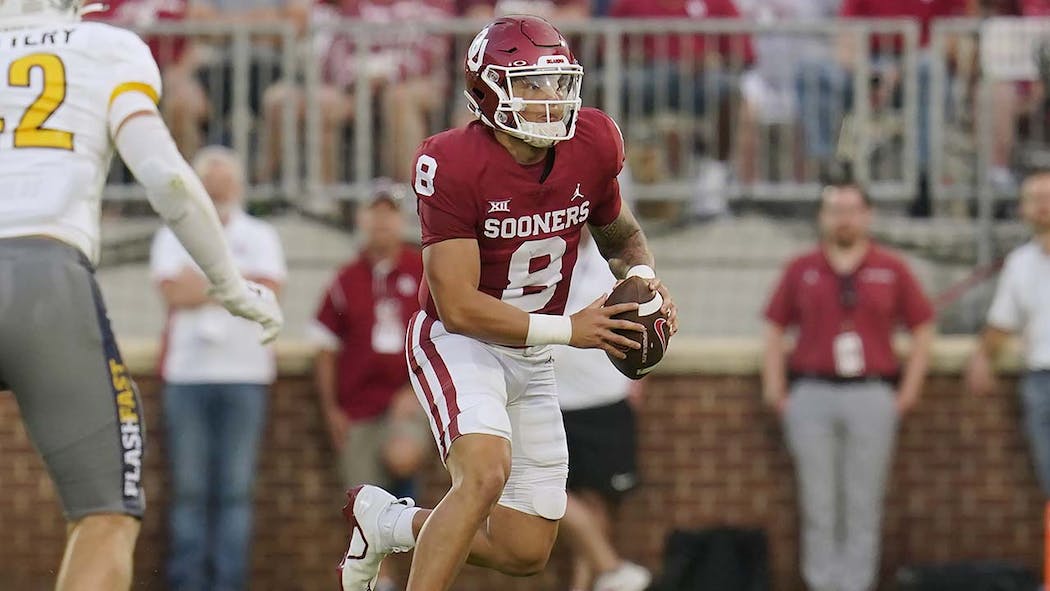 The annual OU-Texas game always brings some level of intrigue to the State Fair of Texas.

This year’s edition will also be about how many healthy quarterbacks are able to suit up for their respective teams.

One-half of the puzzle appears to be firmly in place. Texas quarterback Quinn Ewers will reportedly start for the Longhorns after suffering an injury that knocked him out of their Sept. 10 game against Alabama.

As for the Sooners, nothing is set – or even reportedly set – in stone (as of this writing, anyway).

Mum was the word for OU head coach Brent Venables during Tuesday’s media availability. The Sooners suffered what seemed like an untold number of injuries against TCU, ranging from guys getting nicked up and returning to TBD.

Some Sooner fans have kept a close eye on the team’s Twitter account. The account released a 16-second “hype video” Wednesday night that I guarantee did not hype a lot of people up.

All the video had devotees do, including curious non-Sooner fans like myself, is press their noses on their phone or laptop screens to see who was throwing a football around during OU’s indoor practice.

My verdict: Anyone’s guess is as good as mine, and I have none.

While we wait on Venables’ verdict for Saturday, let’s build cases for four quarterbacks who may see time in Saturday’s game against the Longhorns.

You are correct. What remains unclear is which of three took reps during practice and will be available for the Texas game. Hence the four cases.

This is why General Booty is on this list. Booty comes from a long line of Division I athletes in his family. His dad, Abram, played wide receiver at LSU. An uncle, Josh, quarterbacked at LSU. The most notable uncle, John David, quarterbacked USC to back-to-back Rose Bowl victories in the 2000s.

General has a pedigree all his own. After transferring from a high school in California to Allen High School in the DFW Metroplex (a.k.a. the largest public high school in the largest state), Booty led Allen to a third-round playoff run in the Texas state playoffs in 2020 (The Allen Eagles were upset by Euless Trinity).

He didn’t get much fanfare from high major recruiters, so he opted to play junior college ball at Tyler Junior College in Tyler, Texas before joining OU earlier this year.

He had an up-and-down season in Tyler. There’s a 528-yard and eight touchdown passing game against Navarro Junior College in it but mixed in are two losses to New Mexico Military. Booty combined to throw one touchdown pass and five interceptions in those losses.

Booty would bring a gunslinger’s game if he were to play, but how trigger-happy would he be with: a. one week’s worth of practice and b. playing in the Metroplex again in front of family in what would undoubtedly be the biggest game of his life?

Maybe we should opt for optimism, like News 9 Meteorologist Jed Castles has decided to do.

Let’s stay in DFW but take the Central Expressway south, the George Bush Turnpike west and head up Interstate 35 for a bit.

True freshman quarterback Nick Evers might be the most intriguing possibility for Saturday. He was a consensus four-star recruit from Flower Mound High School and an original commit to Dan Mullen and the Florida Gators. However, with Florida no longer employing Mullen, the new Sooner staff swooped in and was able to get Evers to commit to OU last December.

Nick’s dad, Derrick, described his son in a Sept. 2021 interview as the “consummate late-bloomer” when Nick was coming up at the quarterback position. His time finally arrived as a junior when he threw 21 touchdowns to just six interceptions.

His high school head coach said Evers can’t make every throw, but he made sure to note Evers’ timing and accuracy on throws. Throwing accuracy would certainly be a welcome change to what the Sooners have seen so far at the quarterback position.

If you’d like the fires stoked a little more in Evers’ favor, Venables said Tuesday that he is bullish on Evers’ development thus far.

“We saw all that potential – throwing, running, decision-making – really come to fruition over the last several weeks,” Venables said.

A start against Texas would also be a nice birthday present.

When Dillon Gabriel went down last week, Davis Beville stepped in for the rest of the game. But it isn’t the first time he’s had to do something like that in his career.

After Kenny Pickett opted out and backup Nick Patti suffered a broken collarbone, Pittsburgh brought Beville on to the field during last season’s Chick-Fil-A Peach Bowl.

He showed some gumption in that game, going 14-for-18 passing for 149 yards, one touchdown and one interception while also getting sacked five times.

Since his transfer to Oklahoma, it has been a bumpier ride for Beville. Venables took the starters out in the second half of the Nebraska win last month, which meant fans were going to get their best look at Beville of the season.

Completing two-for-two passes for 14 yards isn’t much to glean from his abilities as a passer, but most fans likely remember him fumbling a handoff to a running back for the Sooners’ first turnover of the season.

When he entered the game against TCU, the offense stalled even worse than before. To be fair to him, that could have been a result of the huge deficit and the mounting injuries.

Both Beville and Gabriel completed seven of 16 passes against the Horned Frogs, but Beville only managed 50 yards to Gabriel’s 126.

What Beville has going for him so far is the coaching staff’s confidence as the backup and a sturdy 6-foot-6, 225-pound frame.

Are the fans just as confident in him if he is QB1 on Saturday morning? I’d be guessing, but I’d guess not.

If he weren’t injured, Dillon Gabriel already being the starter is a good enough case to start against Texas. Booty, Evers and Beville are all differing versions of unproven.

As has been noted in this space following the Nebraska and Kansas State games, some of Gabriel’s passes aren’t simply incomplete; they are wildly inaccurate.

“You want to be standing tall with a slight bend in your legs. Because then, when you make those throws, you’re from a consistent plane,” Griffin said during the first half. “It’s like golf. If you keep your shoulders down in golf, you’re gonna (sic) to be able to swing right through when you go back. By him (Gabriel) having his feet so far out, it’s going to make his hips have to activate and go too far.”

After Gabriel later found tight end Brayden Willis on a 78-yard play that was nearly a touchdown, Griffin discussed what was different about Gabriel’s mechanics.

“You know why Dillon Gabriel hit him (Willis) in stride right there? Aside from the fact that he was wide open!” Griffin said. “His feet were underneath him.”

Whenever Gabriel returns to the field in hopefully better physical and mental shape, he can improve on these good habits, take the next step as a pocket quarterback and help save the Sooner season from further destruction.