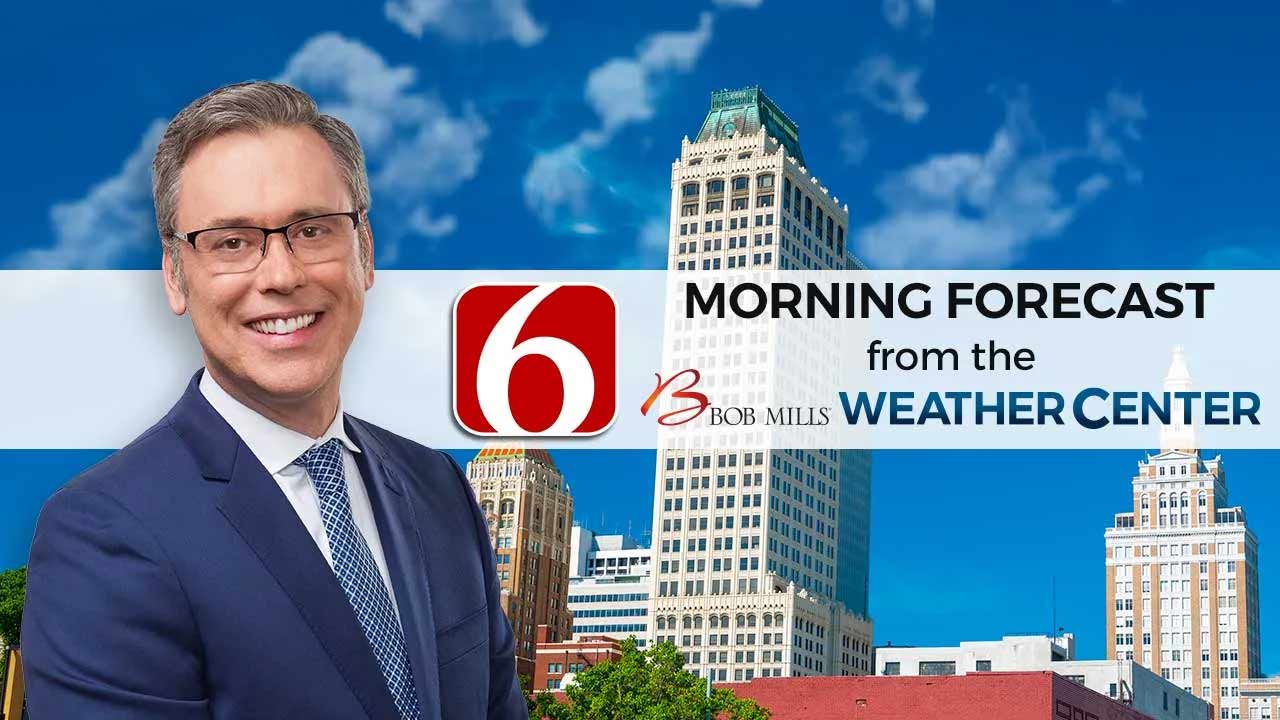 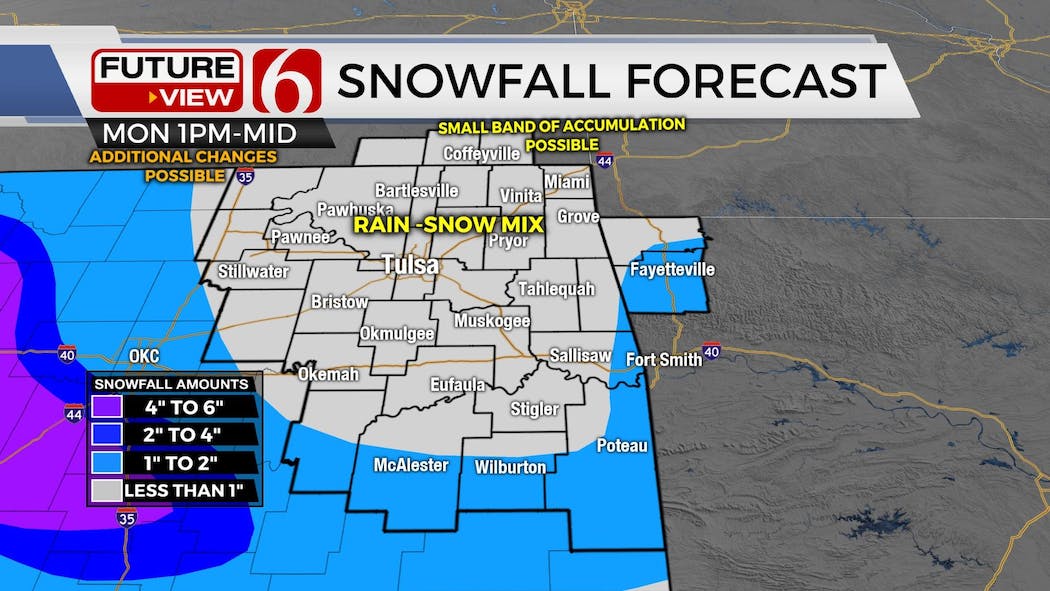 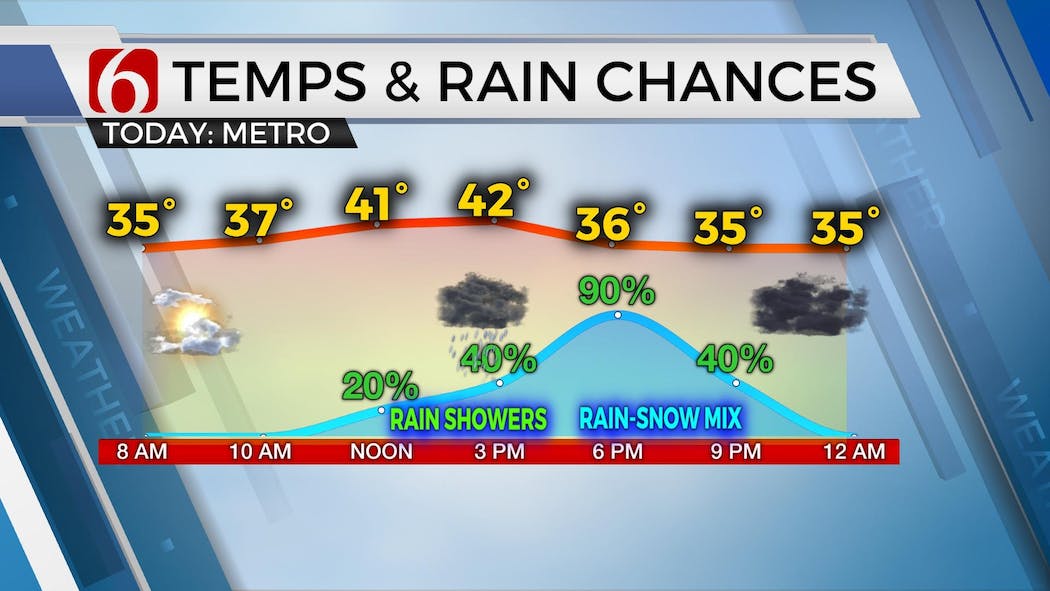 A rain-to-snow mix is possible Monday across northeastern and southeastern Oklahoma with mostly minor accumulations for those areas that do receive snowfall.

Locations west and southwest of the immediate area have higher chances for impactful snow that could result in travel issues. These locations are currently under a winter weather advisory with a small portion of west-central Oklahoma in a winter storm warning where the highest snowfall totals are expected. As of this morning, the Tulsa metro is not included in a travel advisory. Dry conditions are currently underway this morning but will support some rain to snow mix this afternoon and early evening. Temps currently in the 30s will reach the lower 40s early afternoon before dropping into the mid-30s late this afternoon and tonight. This system quickly exits the area this evening with dry and cold weather remaining for the rest of the week.

The main upper-level low is ejecting from New Mexico across west Texas and moving into southwestern Oklahoma early this morning. As this feature moves east, it will weaken and quickly exit our area later tonight. The main track of this system appears slightly south of our main areas of interest. This means higher confidence for some impactful snowfall will occur under and slightly north of the upper low track. A dry slot will wrap into the system later tonight effectively ending any precipitation chances for the area. But the window from early afternoon into the evening will bring a rain-to-snow mix with areas slightly south of Tulsa in a more favorable position for some accumulation. Another small area of accumulation may occur across far northern OK and southern Kansas. We'll have the chance of rain changing to some snow near the metro but the overall window for precipitation will remain short. The highest overall likelihood for the most impactful snow with this event will be confined to part of northwestern, west central, and southcentral OK. Some locations west of OKC could pick up 2 to 6 inches of snow, but most areas mentioned in these areas will see between 1 and 3 inches or wet, slushy snow. These higher totals correspond to the current configuration of the winter storm warning.

The air aloft with the upper low is projected to be around -22 to -24 degrees Celsius or -10 Fahrenheit. If the upper feature remains closed and not opening, a very heavy and localized band of snow will develop along the track of this feature. But the low should weaken later today as it moves across eastern sections of the state. The system is a rather fast-moving storm. Precipitation begins this morning in western OK, nearing the central part of the state by midday and near eastern sections early to midafternoon. The window for actual precipitation is only about 6 to 10 hours in any given location which will also limit precipitation for some locations across northeastern OK as the weakening system approaches this afternoon.

The main window for the Tulsa metro will be approximately 2 pm to 10 pm. Precip will begin as light rain or spotty showers and attempt to change to some snow later this afternoon before ending later tonight. As of this morning, the Tulsa metro is not included in any winter weather advisory but some locations to our south and west are included. Temps may briefly reach the lower 40s early afternoon before wet-dropping into the mid-30s later as precipitation falls. Temps will drop overnight as clouds clear. Tuesday morning lows will be near 30 with afternoon highs rebounding into the mid-40s with sunshine. Cold weather remains for the end of the week before a strong boundary arrives with even colder air Friday with highs only in the mid-30s. A very low chance for some light snow or flurries will be possible Friday into early Saturday but higher chances will remain to our west.

Like most winter systems, track and temperature errors or changes in trajectory can quickly result in changing weather in localized areas. We always encourage you to remain aware of your weather surroundings and check for additional weather updates throughout the day.