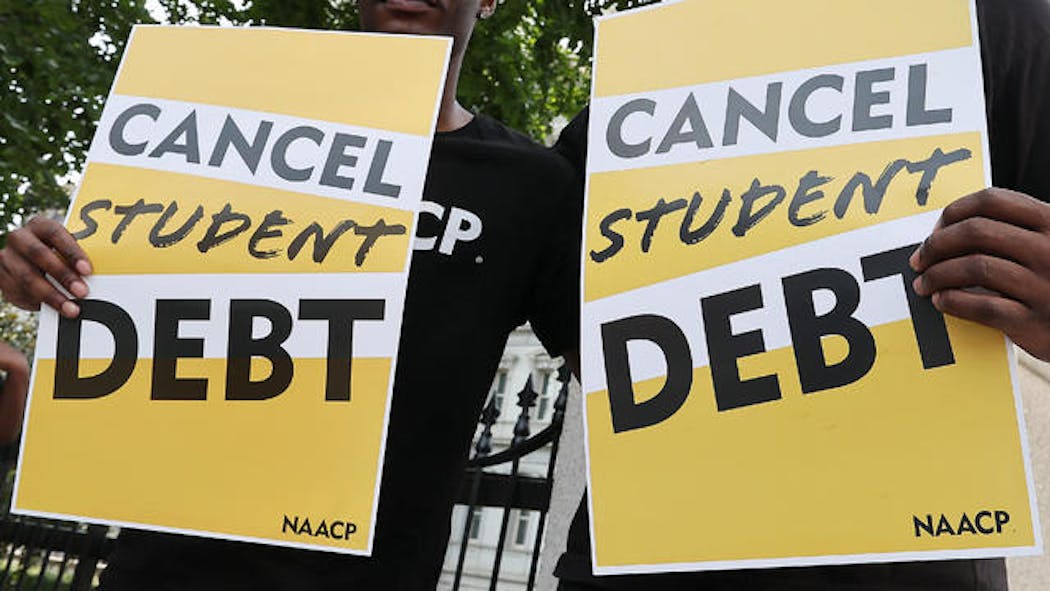 The Biden administration said Thursday it will make it easier for student borrowers in financial distress to discharge their loans in bankruptcy.

Currently, it's hard for people who declare bankruptcy to get their student debt erased, with debtors having to prove in a separate proceeding that paying their college loans would impose an "undue hardship." One study found that only 0.1% of people with student loans who filed for bankruptcy protection even tried to get their higher education debt discharged.

Department of Justice officials said the new rules will make it easier for borrowers who didn't think they could get relief through bankruptcy to find out whether they can get their loans discharged. Typically, a court reviews the borrower's past, present and future financial circumstances to determine if the person is facing undue hardship. But under the new rule, the borrower will instead complete an attestation form, based on which the government will determine whether to recommend discharge.

"Today's guidance outlines a better, fairer, more transparent process for student loan borrowers in bankruptcy," Associate Attorney General Vanita Gupta said in a statement. "It will allow Justice Department attorneys to more easily identify cases in which we can recommend discharge of a borrower's student loans."

The government's overhaul of the process comes amid several setbacks in the Biden administration's plan to forgive up to $20,000 in student debt per borrower. Two courts have now blocked that plan, and as a result the Department of Education has stopped taking applications for debt relief. Before the application was shut, about 26 million people had applied for forgiveness.

It's unlikely the new bankruptcy guidelines for student debt will create a surge in discharge attempts because borrowers still have to prove they are in financial distress to qualify, noted Jaret Seiberg, an analyst with Cowen.

"This is not going to open the door for mass discharge of federal student loans in bankruptcy," Seiberg wrote in a research note. "Borrowers must still demonstrate an undue hardship to get relief. It is not enough to just file for bankruptcy."

Next, the government will judge whether that inability to pay is likely to continue in the future, taking into account age, disability, chronic injury, unemployment history or a lack of a degree, the Biden administration said. About 40% of borrowers are people who enrolled in college but didn't graduate.