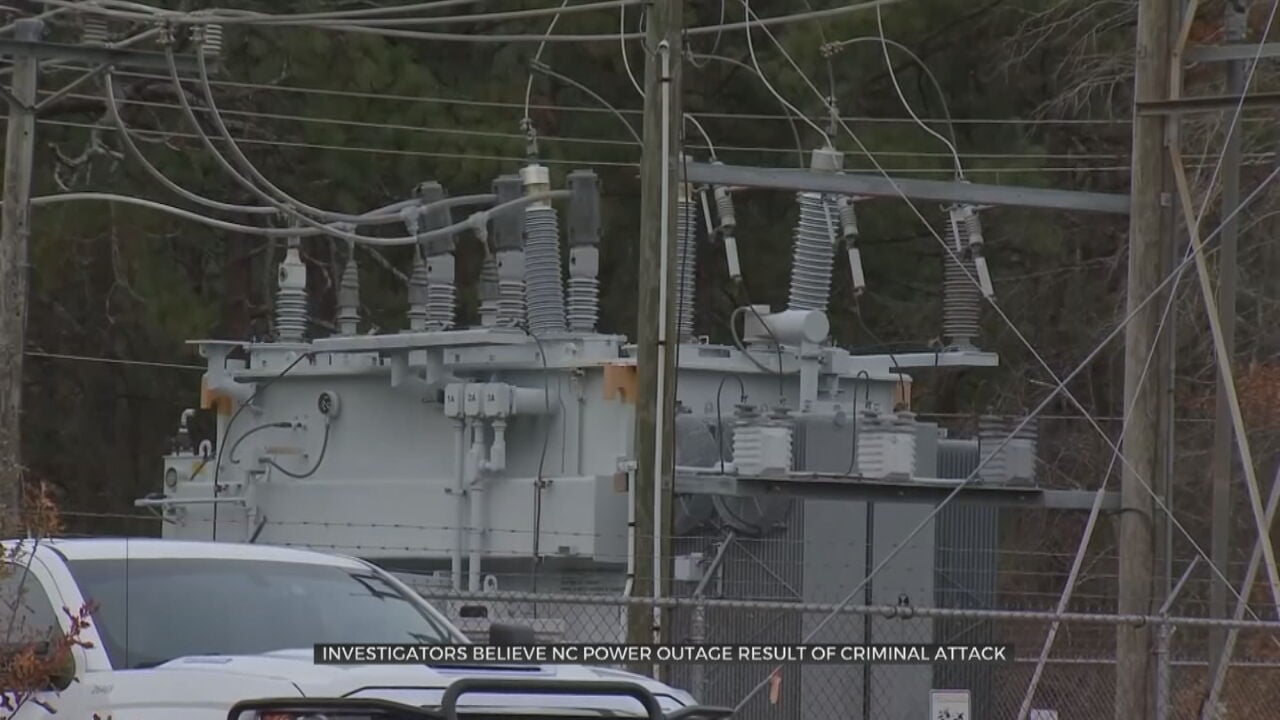 Moore County, North Carolina, has declared a state of emergency as power outages continue after a "deliberate" attack over the weekend in which gunfire damaged two substations. The attack left roughly 45,000 people without power in North Carolina.

Under the state of emergency, a curfew is in place from 9:00 p.m. to 5:00 a.m. each night, and residents of the county are encouraged to conserve fuel.

Jeff Brooks, a spokesman for Duke Energy, said Monday that the company had restored power to about 7,000 customers. About 38,000 remain without power, and Brooks said that it's likely full restoration won't happen until Wednesday or Thursday. In a press release shared earlier in the day, Duke Energy general manager Jason Hollifield said "the damage is beyond repair in some areas."

"That leaves us with no option but to replace large pieces of equipment — which is not an easy or quick task," said Hollifield said.

The outage has also rendered wastewater pumps in the area out of order, and schools in the county have been closed. Traffic lights are also out. Emergency shelters have been opened to the public.

In Carthage, residents Steve and Meg Wilkins' unheated house has dipped to 55 degrees.

"This is not what I wanted to be doing today or last night or the night before," Steve Wilkins said. "Stringing power cords. Eating cold ham."

Power outages were first reported to police on Saturday, Dec. 3, shortly after 7:00 p.m., according to Moore County Sheriff Ronnie Fields. When utility companies responded to the substations, "evidence was discovered that indicated that intentional vandalism had occurred at multiple sites," Fields said Sunday.

No motive has been provided for the attack, which is being investigated as a criminal act. In his Sunday press conference, Fields could not say if the incident rises to the level of domestic terrorism.

On Monday afternoon, Department of Homeland Security Secretary Alejandro Mayorkas addressed the situation, saying the attack "appears to have been deliberate."

"We are working with energy companies in local communities to address the situation impacting the power that reaches homes in the targeted neighborhoods," Mayorkas said. "The question is, is it an act of malfeasance or otherwise? Early evidence suggests that it was deliberate. And the investigation is underway."

The Charlotte, North Carolina, office of the Federal Bureau of Investigation is also looking into the attack. On Sunday, the FBI office told CBS News it was "investigating the willful damage to power facilities" in the area, but declined to comment further because the investigation was ongoing.

"This was an intentional attack that caused significant harm to people," Cooper said.

In January, a bulletin from the Department of Homeland Security, obtained by CBS News, warned that domestic violent extremists "have developed credible, specific plans to attack electricity infrastructure since at least 2020, identifying the electric grid as a particularly attractive target." But DHS has not issued any statement connecting the current situation in Moore County to extremism.

The U.S. has roughly 55,000 substations. Earlier this year "60 Minutes" reported on how vulnerable they often are.

"There's a very few number of substations you need to take out in the entire United States to knock out the entire grid," Jon Wellinghoff, former chairman of the Federal Energy Regulatory Commission, told "60 Minutes" correspondent BIll Whitaker.