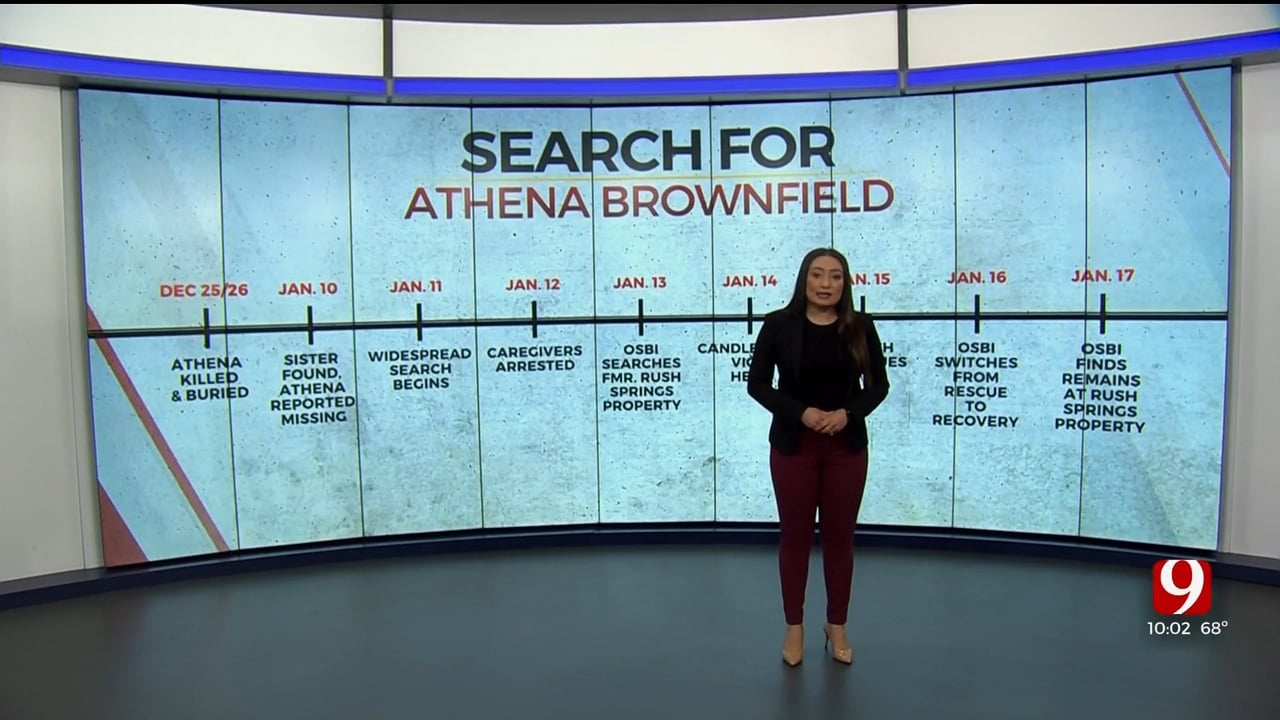 It's the outcome no one wanted in the search for the 4-year-old girl out of Cyril. The search came to an end Tuesday when a body believed to be that of little Athena Brownfield was found.

The OSBI said this is an active homicide investigation.

Court documents allege that on Dec. 25, 2022, Ivon Adams beat Athena and then buried her at his former residence in Rush Springs on the 26th.

On Jan. 10, 2023, Athena’s older sister was found wandering near the family's home in Cyril and Athena was reported missing by the OSBI.

Community members poured into Cyril to help law enforcement on their search the next day.

On Thursday, Jan. 12, both of Athena’s caregivers, Alysia Adams and Ivon Adams, were arrested. Both on child neglect complaints and Ivon with a murder complaint.

The next day, OSBI investigators conducted a search on the Adams' former property in Grady County. It wouldn’t be until Monday that the OSBI announced the search is now considered a recovery operation.

Which brings us to Tuesday, a devastating update with remains have been found in Rush Springs and taken to the Medical Examiner to be identified. All of this happed in the course of one week.

“We’re praying for her family and her relatives and for the investigators that are looking for her,” said Brooke Arbeitman, the Public Information Officer for the Oklahoma State Bureau of Investigation.

“When we first heard I loaded all four of my children up and I started going down the street with my vehicle and I said ‘start saying Athena, look at every area you can see,’” said Brooke Kelley, a Cyril Resident who searched for Athena and attended the vigil held for her over the weekend.

The search came to an end at the Adams’ former Rush Springs property. A child's remains being transported to the Medical Examiner’s Office to determine their identity.

Court documents said Alysia confessed to investigators. She said Ivon "held [Athena] her up by her arms and beat her" on Christmas.

The former Marine then drove from Cyril to Rush Springs in the early morning hours of Dec. 26, 2022, and told Alysia he “buried her near a fence line” next to their old property.

“We don’t have a lot of resources here being a small town so we’ve tried to bring in every option that we have available,” said Garrett Raney, the Cyril Chief of Police.

Ivon was finally arrested in Arizona on a felony warrant for murder in the first degree in Oklahoma and child neglect while his estranged wife Alysia Adams remains behind bars in Caddo County.

The state is now working to get Ivon extradited to Oklahoma. Alysia was arraigned Tuesday and is being held on a $500,000 bond. She is due in court again March.