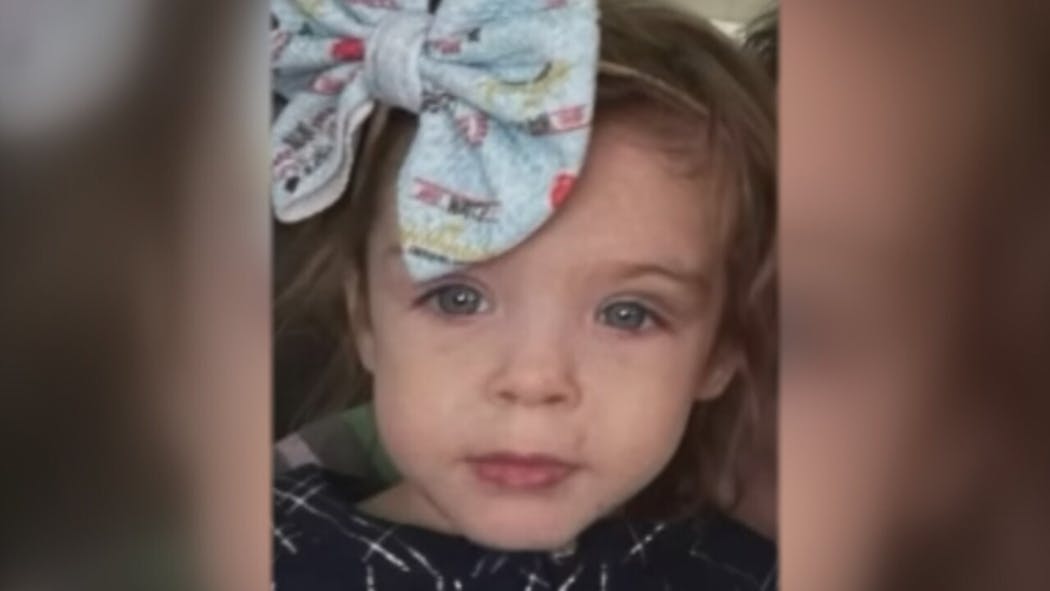 The creator of a GoFundMe page called "Official Fundraiser for Athena Brownfield" said he is redirecting people to donate elsewhere after getting online backlash.

Landon Jetmund, who said he is the brother of Athena's grandmother, told News 9 he is estranged from some members of his family and didn't know about the existence of Athena or her older sister, until this past weekend.

He learned about them after hearing news of Athena's disappearance.

Athena, 4, was reported missing in Cyril on Jan. 10 after a postal worker found the young girl wandering by herself.

According to an arrest warrant affidavit, Alysia told investigators that Ivon beat Athena to death and buried her next to the Adams' old home near Rush Springs.

The Oklahoma State Bureau of Investigation said a child's remains were found on the property exactly one week after Athena was reported missing. The remains were brought to the Medical Examiner's Office and are still to be identified.

Jetmund said after he learned about what happened to Athena, he created a GoFundMe page to benefit the two girls.

"Everybody was like, 'Where was everybody? Why didn't anybody protect her? Where were the family members?' I'm like, 'OK, well I'm going to step forward and do something,'" Jetmund said.

Jetmund said his initial goal was to raise money to cover Athena's funeral, with all remaining funds going to a trust to benefit Athena's sister. After learning the funeral would be covered, Jetmund said he wanted Athena's sister to be the focus of his fundraising efforts.

After learning the funeral would be covered, Jetmund said he wanted Athena's sister to be the focus of his fundraising efforts.

"We want to make sure that little girl is taken care of and that nobody can access that money until she's 21," Jetmund said.

But after Jetmund created the GoFundMe page, many Facebook users questioned the legitimacy of the fundraiser. Numerous people reported the page to GoFundMe.

They urged people to instead donate to an account that has been set up in the girls' names at The First National Bank & Trust in Cyril.

A bank representative confirmed to News 9 that the account for Athena and her sister exists.

The pastor of Family Life Church in Cyril also confirmed the existence of the account at the bank.

Jetmund said he reached out to both The First National Bank & Trust and GoFundMe to try to connect his fundraiser to the account at the bank so that all the money his page collects goes directly to the fund for the girls.

The bank representative would not confirm whether Jetmund contacted them.

The funds already donated are being held while GoFundMe conducts the review.

Due to the backlash Jetmund has been receiving since the creation of his GoFundMe page, he decided on Thursday to urge everyone to donate to the account at The First National Bank & Trust in Cyril instead.

Jetmund said he is still waiting to hear back from GoFundMe on what will happen to the $840 already donated to his page. He said he also contacted the Oklahoma State Bureau of Investigation to ask how that money can be sent to the account at the bank.

Anyone wishing to donate to the account benefitting Athena and her sister can stop by any of the branches of The First National Bank & Trust. Click here for a site locator.

Alternatively, donations for the girls can be mailed to The First National Bank & Trust Co. at: PO Box 89 Cyril, Oklahoma 73029

In addition, anyone wishing to support the girls can buy a #TeamAthena t-shirt, said organizer Candie Jones. Sizes toddler to XL are each $20 while 2XL to 5XL shirts are $22 apiece. Payments can be sent to the PayPal account of Family Life Church in Cyril, which is @FLCCyril. Put #Athena in the memo.

"I have my own babies, and these girls deserve the world. So I am just one little human in a very loving, supportive community that this our way in trying to help any way possible," Jones said.

For questions on the t-shirt fundraiser, message Candy May-Jones on her Facebook page.