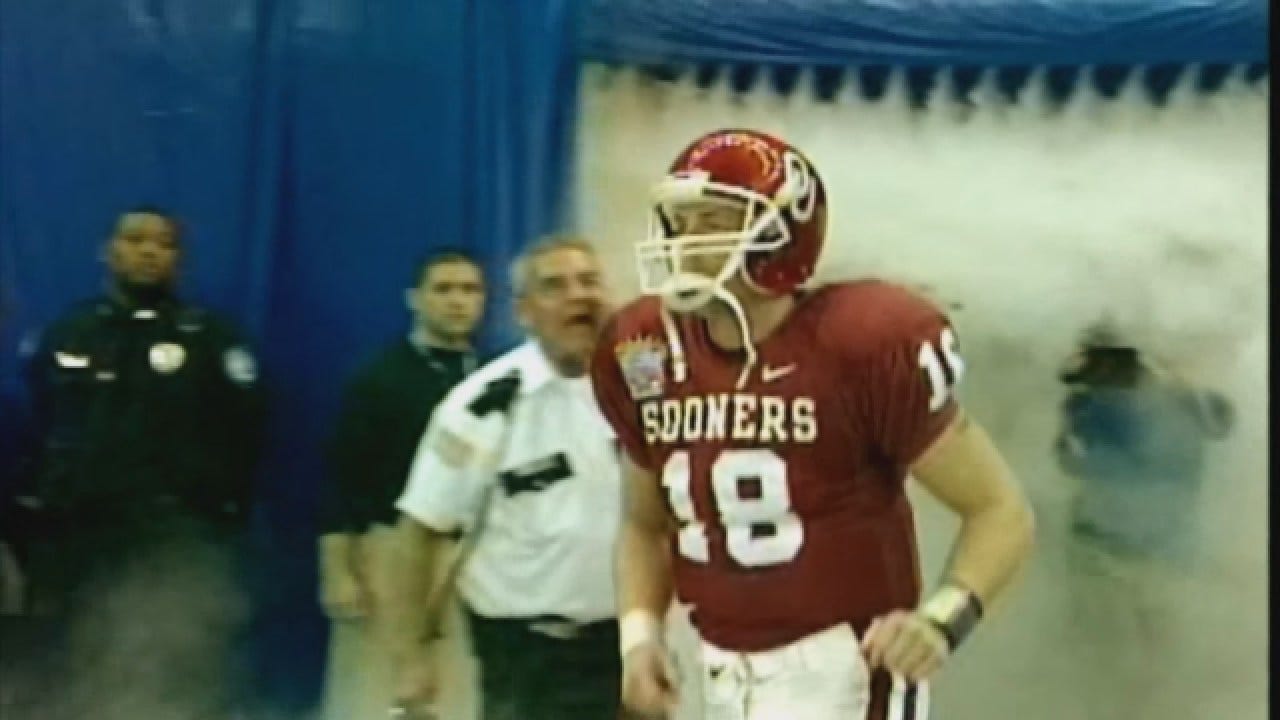 Jason White thought he had it all figured out but fate, injuries and the Sooners led him to take a different route to the Heisman Trophy. White had not one but two season ending knee injuries requiring reconstructive surgeries. While most counted him out for good, the hometown hero from Tuttle, battled back to beat all the odds.

As another day dawns in Tuttle America, the small town reminds you of its big bragging rights. Home of Jason White, the 2003 Heisman Trophy winner.

He's always been a Tiger and even though his looks have changed over the years, his drive never did. But Jason White still regrets the game that got away.

"Against Sulphur my junior year double overtime," remember Jason White, 2003 Heisman Trophy winner. "We went for two and I tripped. I got tackled right here on the two-yard line and I remember looking straight that way to see if I'd made it across the goal line. And I didn't make it."

A lifetime of memories rushes in at The Bill Hinkle Field at Tigers Stadium in Tuttle.

"You would run out on the field," he said. "You could see dad over here and look up and see mom."

Jason White excelled as a high school quarterback and by his senior year, big collegiate programs were recruiting. Except the one team he loved, the Oklahoma Sooners. However, things dramatically changed one December day back in 1998.

"I got home from school that afternoon and mom said you got a couple of messages from some coaches. She said, 'a new one called Coach Stoops,'" he said. "Then I called him back immediately and he's like 'I'd like to come out and talk to you' and I said, 'well ok when would you like to come?' And he goes 'how far is Tuttle?' And I said, 'well it's about 45 minutes' cause there wasn't the turnpike and he goes, 'alright I'll be there in 45 minutes.'"

Number 18's first snap for the Sooners came on a big stage, the OU-Texas game. Starter Nate Hybl got hurt and Jason White says he was scared to death when he got in the huddle.

"I was so nervous, so Trent actually called the play and I actually got sacked the very first play and so after I got sacked, we drove down the field and scored the only touchdown that game," White said.

The sooners won, and Coach Bob Stoops knew he had a great leader in the making. Jason's success landed him the starter's job and a few games later, the showdown in Nebraska, #1 vs #2 Oklahoma and that's when the unexpected happened. In the second quarter, White's season ended with torn ACL to his left knee.

"I thought 'ok I'll have surgery, come back and it will be good,' he said. "And the very next year, I came back, earned the starters job from the get go and then my second start of that year, I hurt myself, hurt the right knee against Alabama. Knowing I was fixing to have a kid. Knowing that this is a second injury. Listening to people talk about how I was probably not going to play again. You know it was hard to just sit back and have all those things on your plate. And so, once I decided 'hey I'm gonna have surgery, I'm going to do everything possible to play again. And if I don't, at least I can say that I tried."

"It's funny what God gives ya, he takes away maybe his mobility and now Jason has to rely solely on his arm and his smarts and look what he does, wins the Heisman trophy and leads us to a couple of great years," said Stoops.

Jason remembers when they called his name at the ceremony in New York.

"Everything went blank after that.," he said "I remember looking at my parents and gave them a hug. To be able to share that moment with my coaches and teammates because at the end of the day I was able to be on a great team with great players and I just happened to be the quarterback."

While his 40-pound statue and elite hardware are so impressive, the competitor in White still thinks about the game that got away. The national championship against LSU.

"You know I was pretty beat up from that K-State game and I had about three weeks to heal up from that, but I was still pretty beat up," he said. "In fact, in the third quarter, I had broken my bone in my foot and got it taped up and continued to play. Plus, I don't care if I could not even walk, I was gonna play in that game. It's the whole reason you play college football is to play in that game."

And about that pass?

"So I had to rush the throw and I couldn't put enough air on it for him to get it," White remembers. "I've watched it on film a thousand times and it's like this far past his fingertips. You know, if he catches the ball he scores. We had momentum and I think we would've won the game. It's been a long journey and a lot of roller coasters, but at the end, it was well worth it.