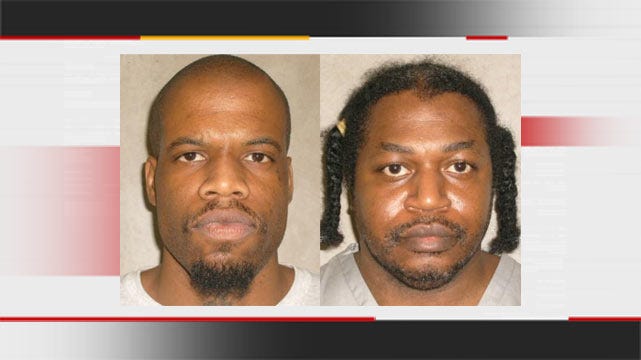 An Oklahoma County Judge ruled Wednesday a statute that says the state doesn't have to reveal where they are getting the drugs used in lethal injection is unconstitutional.

This has become an issue because the state has had a difficult time obtaining the drugs needed for lethal injections. Judge Patricia Parrish said if the court couldn't even find out where the Department of Corrections is getting the drugs, then the statute is unconstitutional.

The two inmates at the center of the case: Clayton Lockett who is on death row for shooting and burying a 19-year-old woman alive and Charles Warner, to be put to death for raping and killing his girlfriend's 11-month-old daughter.

Attorney's weren't arguing if they should be executed. Instead they want greater transparency in how the state is carrying it out.

"Even the worst of us, even the ones who don't deserve our sympathy deserve to get the information to evaluate if they will be executed cruelly and unusually," said Seth Day, one of the attorneys representing Lockett and Warner.

In papers filed with the court, Lockett's attorneys say when Michael Wilson was executed in January, witnesses say his last words were "I feel my whole body burning", raising questions if the state is using drugs that violate the 8th amendment.

"The statue prohibited our clients and anyone else from ever getting access to the information to know if they were doing it legally," said Susanna Gattoni another one of Lockett and Warner's attorneys.

The state countered saying they have a legitimate government interest in shielding those who are providing the drugs from threats or intimidation citing one place that received a bomb threat.

"The issue of confidentiality surrounding the state's source of lethal injection drugs has been litigated at both the state and federal level and found to be constitutional," said Diane Clay, Director of Communications for the Oklahoma Attorney General's office. "These legal maneuvers by two convicted murderers are an attempt to avoid their punishment for the murders of Stephanie Neiman and 11-month-old Adrianna Waller. The Attorney General's Office will keep working to see that justice is served for the innocent victims and their families, and that the punishment handed down for their senseless murders is carried out efficiently, truthfully and without further delay."

Lockett is scheduled to die April 22. Warner on April 29. Their attorneys say they will file a motion for a stay of execution.