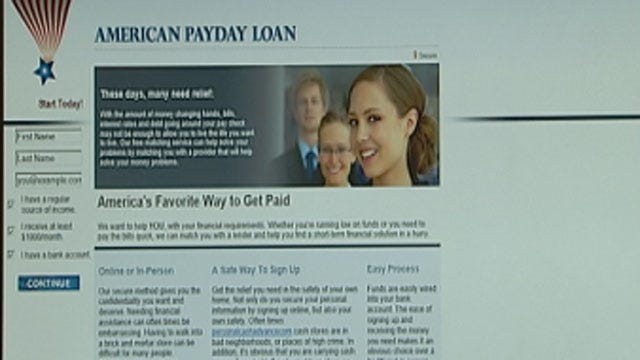 She was trying to get a loan but ended up losing hundreds of dollars. A Norman woman says she was scammed by an online payday loan company.

"I just wanted it as a credit builder," she said.

Within 24 hours she got a call that she was approved. Then 15 minutes later she got another call.

"(He was) saying they needed $225 to ensure I was able to get the loan because my credit was poor. Okay I did that," Tucker said.

Using a pay pack she paid them the $225. Then 20 minutes later, she got another call saying she needed to pay another $300 to clear up a flag at her bank. She paid that too and was told she would get the loan within two hours.

Now whenever she calls all she gets is a voice mail message.

"If anyone asks for money up front, that is a scam," said Diane Clay, Director of Communications for the Oklahoma Attorney General's office.

Clay says no legitimate payday company will make you pay any money up front.

"With payday loans you have to be very careful on-line," said Clay. "There are some legitimate payday loan companies on-line but we recommend people just go to the many actual physical locations."

Tucker says she has learned her lesson. And she's sharing it so other don't do the same.

"These people are victimizing people and you will never see your money again," Tucker said.

If you have any questions about anything that is suspicious, payday loans or not you can call the attorney general's consumer division and get their advice. That number is (405)-521-2029.