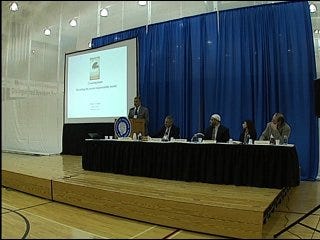 For the first time in history, Islam has overtaken Roman Catholicism as the largest single religious denomination in the world.

A report released by the Vatican shows Muslims now make up 19 percent of the world's population.  Catholics make up 17 percent.

News of Islam's growth has the world taking a closer look at the religion. That's why organizers of Saturday's conference at Oklahoma City University say understanding that faith is more important than ever.

Dr. Jill Carroll, Rice University professor, was one of about a dozen speakers at the conference titled "Denouncing Violence in the Name of God: The Case of Islam."

"Unfortunately what many people living in Western America understand about Islam is that it is a terrorist religion," Carroll said.

At a time when many Muslims are having larger families and the Islamic faith continues to grow, Father William Ross, St. Eugene Catholic Church, said America's pop culture may be to blame for a decline in religions like Catholicism.

"We believe in freedom of religion," the Oklahoma City priest said. "That gives everybody a choice of believing, doing, practicing as they choose. But the problem with that is we don't have a culture that supports and holds up all that faith and all that practice and rituals. "

Ross said extremists are a very small fraction of the Islamic faith. Organizers of Saturday's conference said the best way to change how others view Islam is for Muslims to stand-up and denounce the violence.