OKC Man Injured In Fiery Attack That May Be Hate Crime 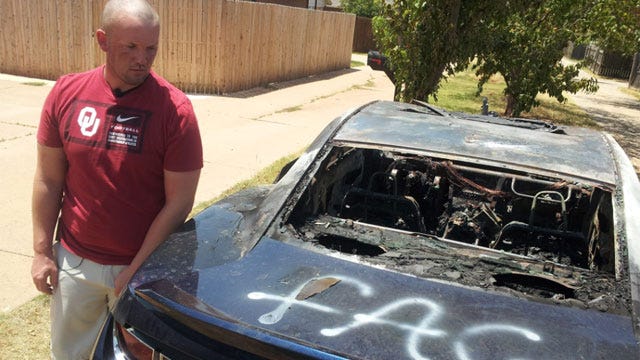 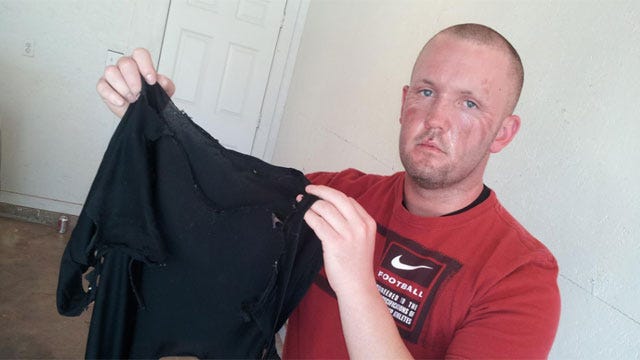 OKLAHOMA CITY -- A metro man comes close to losing his life after his car explodes right in front of him. What's worse is the victim may have been the target of a hate crime.

It happened the morning of Saturday, July 21, in an alley behind his home on N.W. 140th Street near Western and Memorial in Oklahoma City. Jon Ferguson says his car alarm woke him up and when he walked outside, a couple of people were vandalizing his car.

As Ferguson approached them, one of the suspects threw something in his Camaro that caused an explosion and fire. Ferguson rushed inside his home and called 911. He also jumped in the shower and attempted to peel parts of his melted shirt off body. One of his roommates took a photo of the burning car while waiting for fire and police crews to arrive.

Ferguson was rushed to the hospital in an ambulance with first and second degree burns to his face, arms and torso. He was treated and released. On Sunday, the 25 year old returned home for the first time since the fire. He's frustrated because he has no idea who did this; but to make matters worse, the vandals spray painted a three-letter homophobic slur on his car. Ferguson is an openly gay man now doubting his decision to come out.

"It's almost not worth being proud of who you and trying to show you're gay because stuff like this really does happen," said Ferguson. "I've always seen it on the news that kids are dying and stuff because they're being bullied, and you're 25 years old and something like this happens to you. It's almost not worth it, and you understand why kids don't come out of the closet."

Ferguson says he spoke on Saturday with investigators with the Oklahoma City Fire Department.

The Oklahoma City Fire Department is investigating the fire and right now the case is considered to be an act of arson. Chief Homer Jones tells News 9 investigators plan to interview Ferguson again to obtain additional information and details, but right now there are no suspects.

Chief Jones said if it is a hate crime, the Oklahoma City Fire and Police Departments would continue to conduct the investigation.

"When anyone is victimized in this way, it is a tragedy. When it is compounded by hate based only on sexual orientation, it victimizes an entire community. This horrific incident is a sad and vivid reminder that Oklahoma City's LGBT community is still not fully accepted. Cimarron Alliance will work diligently with authorities to make certain those responsible for this hate-based crime are punished to the fullest extent of the law. Hate is not an Oklahoma value and those responsible for this crime must be brought to justice."

Anyone with information on who started the fire is urged to call the Oklahoma City police or fire departments.

OKC Man Injured In Fiery Attack That May Be Hate Crime