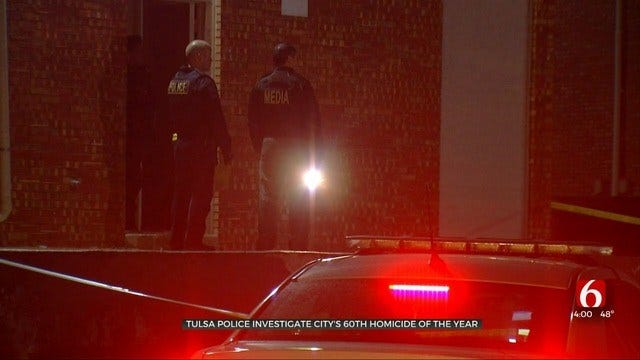 Tulsa Police released new details on a fatal shooting last week. Authorities said the man who shot Alfred Guy did so in self-defense after Guy stabbed him.

TPD said Alfred Guy, who was high on PCP, went over to a friend's apartment to ask for a ride. When the friend said no, police said Guy attacked his friend.

Tulsa Police said Guy stabbed his friend in the back, so the friend pulled out a gun and shot Guy once. Police say Guy died the next day - on Thanksgiving morning - at the hospital.

This all happened last Wednesday night just before 9 at the Town Square Apartments near Apache and Peoria.

Police said the two had known each other for awhile. Officers said because Guy was high on PCP, they believe he was a little more violent than normal, and the shooting appears to be justified.

"The shooting appears to be purely in self-defense. I mean, he was in the process of getting stabbed so if that's not self-defense I don't know what is," said Sgt. Brandon Watkins, Tulsa Police Homicide.

Police said Guy's friend was just released from the hospital. They said they don't foresee the district attorney pressing charges.