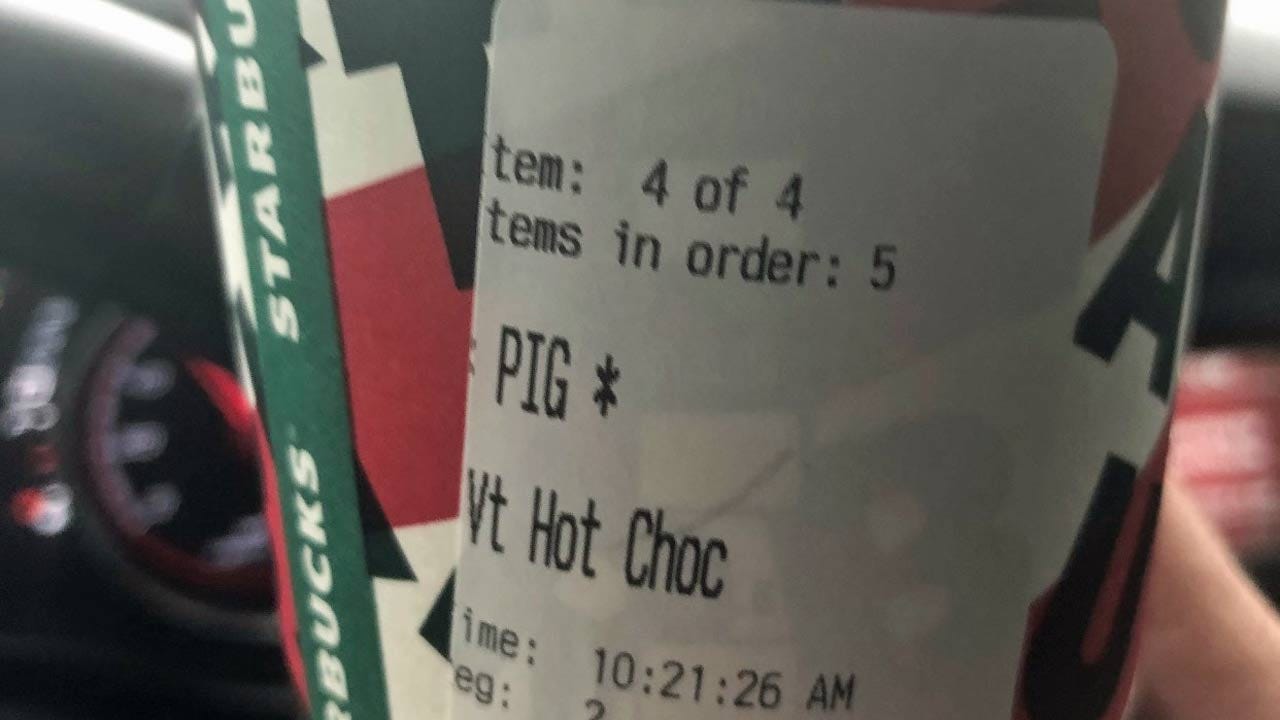 Starbucks apologized to a Green Country Police Department after a Kiefer police officer said he received his drinks with the word "PIG" written on the cups.

Kiefer Police Chief Johnny O'Mara said one of his officers who was working Thanksgiving went to the Glenpool Starbucks to get coffee for dispatchers who were also having to work the holiday. Each of the five cups the officer received had the "pig" label, O'Mara told News On 6.

"This is what he gets for being nice," O'Mara posted on Facebook with a photo of one of the cups.

"What irks me is the absolute and total disrespect for a police officer who, instead of being home with family and enjoying a meal and a football game, is patrolling his little town," the chief said.

"This cup of coffee for a 'pig' is just another little flag. It’s another tiny symptom and a nearly indiscernible shout from a contemptuous, roaring and riotous segment of a misanthropic society that vilifies those who stand for what’s right and glorifies the very people who would usher in the destruction of the social fabric. It’s another tiny pinprick into the heart of men and women who are asking themselves more often: 'Why am I doing this?'"

O'Mara said he called the store and was told they would replace the coffee with a corrected label.

He said the employee who made the labels called the officer Thursday and apologized, saying it was meant to be a joke between her and another co-worker.

"Just dealing with - when we're dealing every day with anybody - a little courtesy goes a long way."

There are several online rumors about how it all happened, but Kiefer's police chief said the ones he's seen aren't true, and he wanted to emphasize that the officer was by himself when the incident took place.

He said the following:

"This is absolutely unacceptable, and we are deeply sorry to the law enforcement officer who experienced this. We have also apologized directly to him and are working to connect with the police chief as well to express our remorse.
The barista has been suspended pending the outcome of our investigation into this matter. This language is offensive to all law enforcement and is not representative of the deep appreciation we have for police officers who work to keep our communities safe."

"This is totally unacceptable and offensive to all law enforcement. We are deeply sorry and have apologized directly to the officer who experienced this. We have launched an internal investigation into this matter and our leaders would like to connect with you directly to apologize to you and the entire department. We invite you to send us a private message so that we may connect you with our leadership."

"Starbucks, You’re a corporation trying to sell a product. I’m certain you don’t condone this kind of juvenile activity. The employee made an unfortunate decision which, in turn, negatively effects your company’s image. I appreciate you reaching out to my officer and I also appreciate the employee reaching out and apologizing on her own. Our society needs a touch of old fashioned civility restored. Maybe we could use this bad event and convert it into something better."

Starbucks and the Kiefer Police Department issued the following statement:

Starbucks and the Kiefer Police Department are committed to using this regrettable incident as an opportunity to leverage our shared platforms to promote greater civility. In the coming days, Starbucks will be meeting with the Kiefer Police Department to begin discussing ways to work together, including a jointly hosted Coffee with a Cop event at Starbucks where local law enforcement can meet with baristas and members of the community to discuss the critical role dispatchers and police offers play in keeping our communities safe. Together with law enforcement agencies, Starbucks will jointly look for educational opportunities for our partners across the United States to promote better understanding and respect.