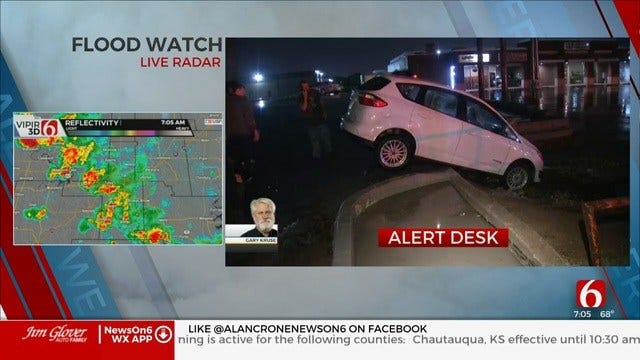 Thursday's storms are causing power outages across Green Country this morning as well as problems for drivers with flooding for a second time this week.

Right now, PSO is reporting the largest number of power outages in the Tulsa area and is reporting around 500 customers without power Thursday morning.

News on 6 Storm Tracker Darren Stephens found a power pole that was on fire in the Haskell area around 3:30 a.m. Thursday morning that caused a power outage.

Darren said it looked like strong winds broke two of the lines, which caused them to hit the pole, sparking the fire. Darren said repair crews responded within 5 minutes and got the fire out and repaired the pole.

And again Thursday morning, News On 6 saw several cars stuck in high water near 43rd Street and Sheridan. That area is known for flooding when we get a lot of rain very quickly. But some good news is that once the rain moves through that water leaves the road pretty quickly.

The storms also caused some accidents in the area.

News On 6 Storm Tracker Bob Rohloff came across a head on crash during the storms near East 150 Road and Highway 169. News On 6 was told one of those victims is now in the hospital. No word on their condition, or the conditions, of the people in the other vehicle.