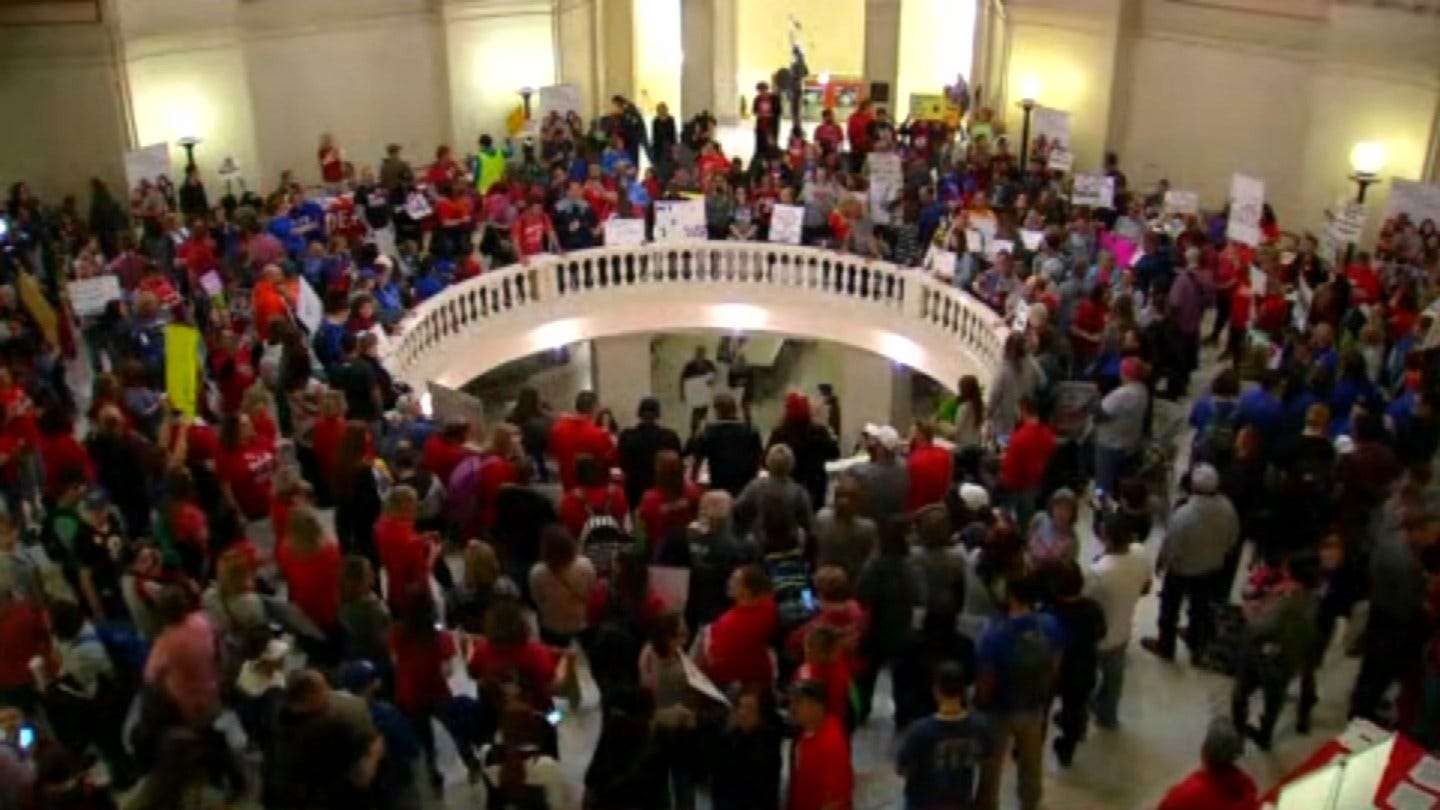 Oklahoma teachers held a walkout for increased education funding for the first time since 1990. Here's a timeline of some of the key events that took place leading up to and during the event.

February 12: Step Up Oklahoma rally in OKC. Hundreds of teachers and students from across the state attended a rally at the Capitol in support of the "Step Up Oklahoma" plan. Part of that plan - introduced by a group of Oklahoma business and civic leaders - includes new taxes to give Oklahoma teachers a $5,000 pay raise.

February 13: Step Up Oklahoma plan - Bill 1033 - fails in the House of Representatives.

February 28: Bartlesville school board, teachers, parents and other members of the community meet to discuss a possible suspension of classes in April. More than 500 people attend the special meeting of the school board.

March 5: OEA President Alicia Priest announces a survey the OEA says found 80 percent of teachers and 76 percent of parents support a walkout. She said they were finalizing a list of demands that - at the time - included a $10,000 pay raise for teachers over three years and a $5,000 pay raise for support workers over the same time period. The demands also included a general funding increase that was not yet determined.

March 10:  State workers, represented by the Oklahoma Public Employee Association, vote to strike alongside teachers if they don't get raises. They ask for a $2,500 pay increase per state employee for each of the next three years, and they want lawmakers to reverse recent cuts to state agencies.

March 26: State House passes $447 million tax bill to give Oklahoma teachers raises they demand in House Bill 1010xx. The bill included increases in the taxes on motor fuel, both gasoline and diesel, a $5 per room tax on hotels and motels and an increase on the tax on oil and natural gas production, called gross production, from 2-percent to five percent. The main sticking point in negotiations for about a year now.

March 28: State Senate passes $447 million tax bill  a tax increase on fuel and tobacco, a $5-per-room tax on hotels, and an increase on the gross production tax to 5 percent, but House

March 29: House repeals $5 per room tax on hotels and motels.

March 29: Governor Fallin signs three bills into law: one on taxes, one on the teacher pay raise and education funding, and a revenue package to make it all happen.

April 2: Teacher walkout begins. Thousands of teachers, students and families march on the Capitol, talking to lawmakers and protesting inside and outside the Capitol building.

April 4: Governor Mary Fallin angers teachers by comparing them to a teenager who wants a better car. Tulsa teachers begin the March for Education, walking from Webster High School to the Capitol. House Bill 1019xx - the Amazon third-party sales tax - passes the House of Representatives.

April 9: "Women in Black" group of Tulsa attorneys marches on Capitol to negotiate with lawmakers, teachers and show support. Senators Josh Brecheen and Nathan Dahm call for elimination of tax credit refunds for wind energy as a way to raise money for education.

April 10: March for Education ends as teachers walking from Tulsa to Oklahoma City arrive at Capitol. House votes down bill ending capital gains deduction. Governor Fallin signs new Amazon tax bill and ball and dice bill. She also signs the repeal of the hotel-motel tax that was in the original education funding package.