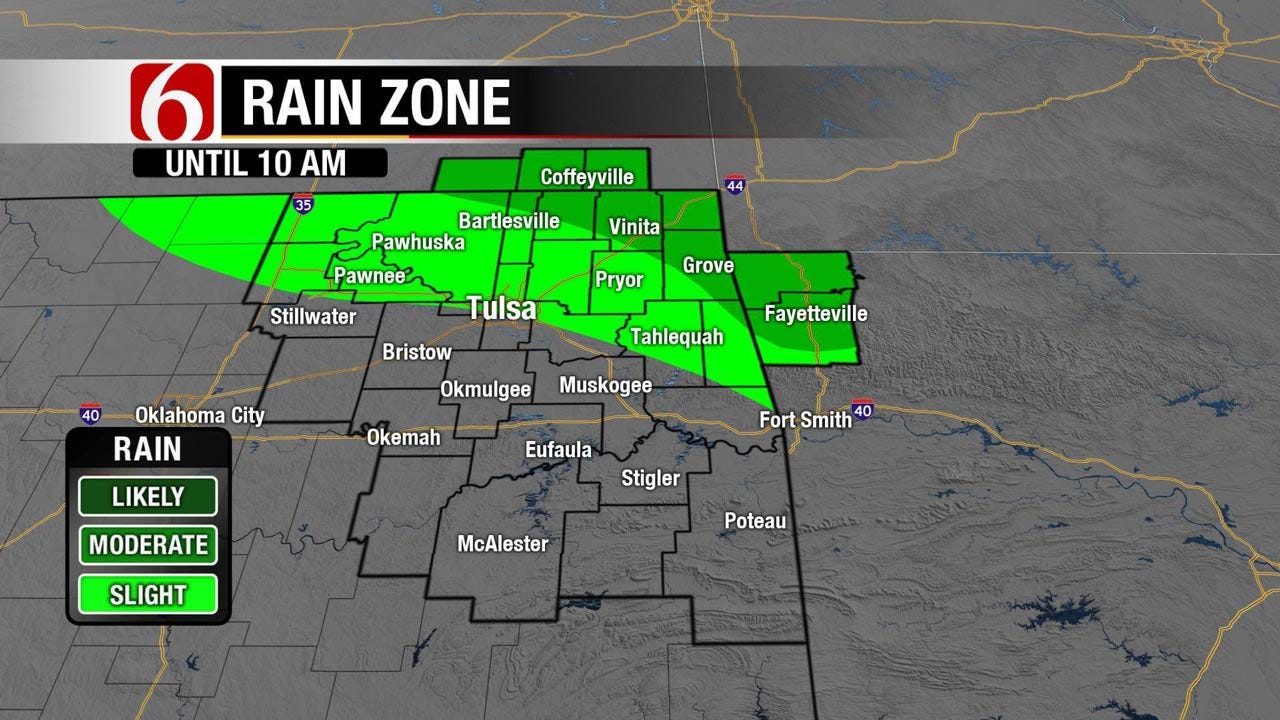 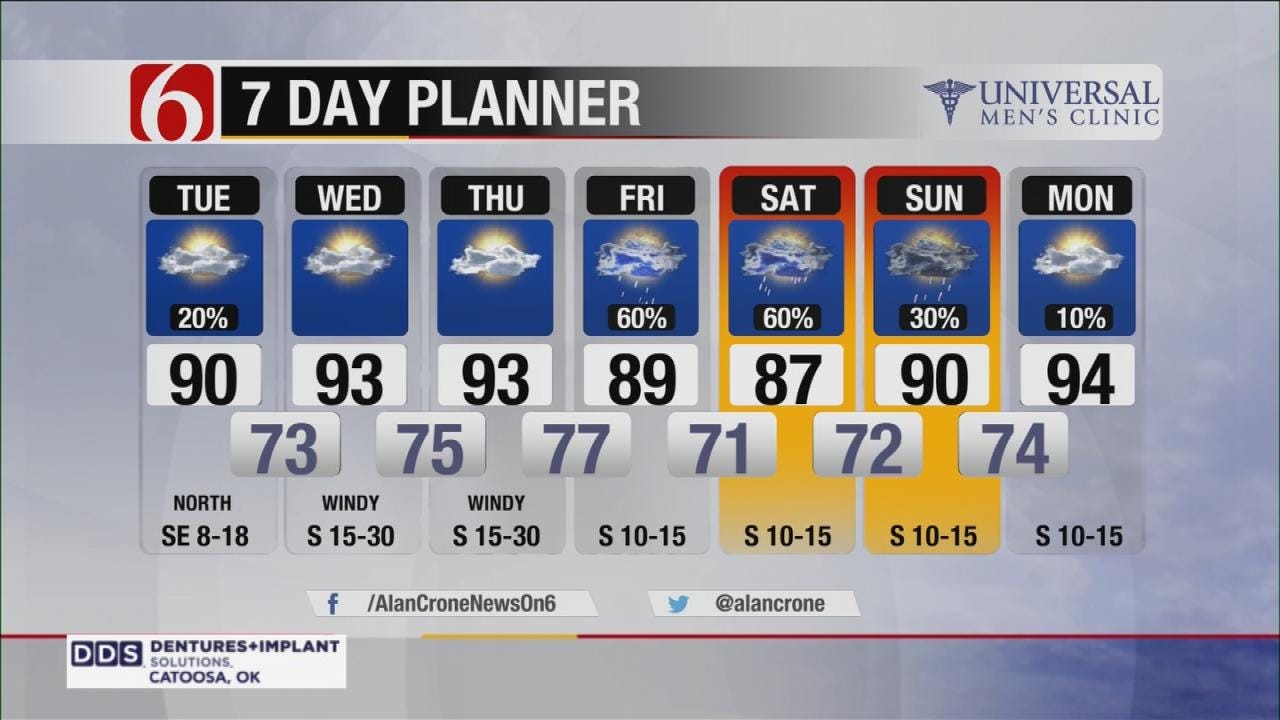 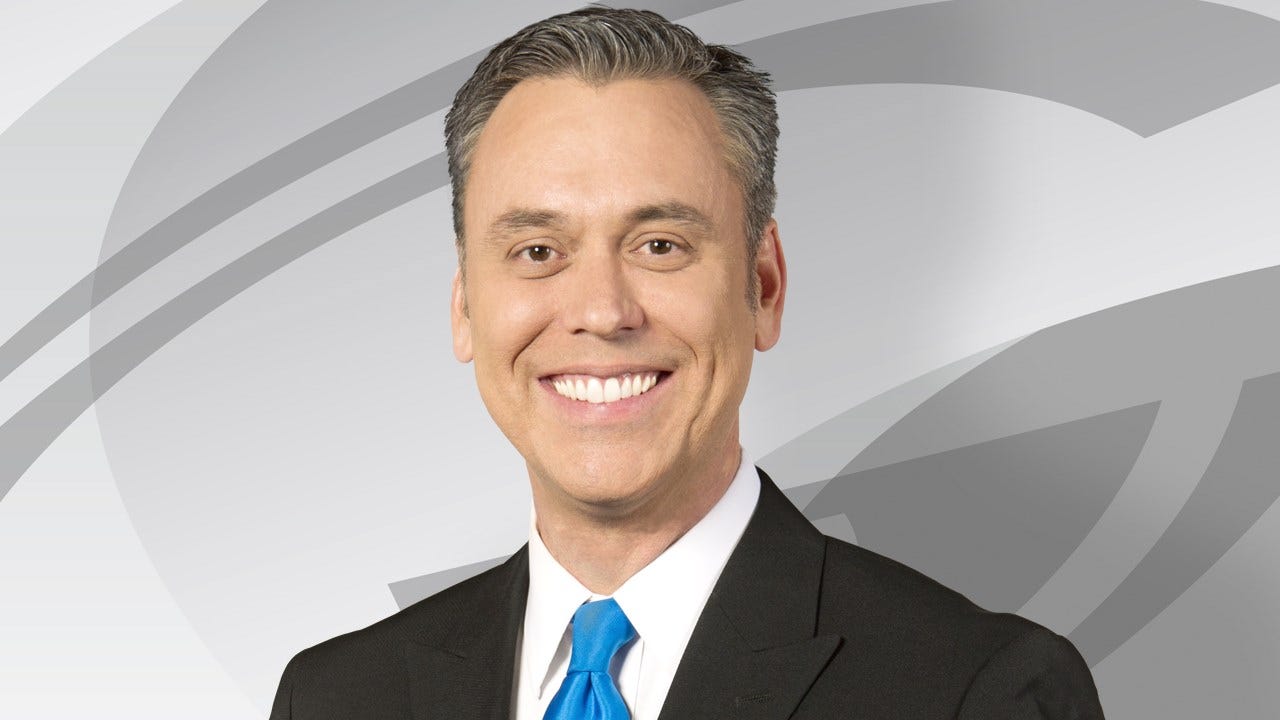 A few storms are likely to brush far northeastern Oklahoma and southeastern Kansas for the next hour or so before moving out of the region.   Otherwise a few storms will also continue across far northwestern Oklahoma for another hour or two.  Temperatures this morning will remain mild with most locations in the mid-60s.   Afternoon highs are expected in the upper 80s to lower 90s today along with south winds around 10 to 15 mph.

Stronger winds are likely Wednesday and Thursday as a stout surface low deepens in response to a mid-level trough advancing across the northern high plains into the upper Midwest.   This system will eventually shove a surface front southward into northern Oklahoma before stalling along the I-44 corridor region by the end of the week with increasing rain and storm chances for some locations Friday into the weekend.   This boundary will more than likely serve as a focus for some storms before the front either becomes diffuse or lifts northward Sunday.   The data also support another mid-level trough nearing the area early next week with a few storms possible for either Monday and-or Tuesday, the 3rd and 4th of July.   This chance will remain rather low at this point in the forecast cycle.

The upper air flow remains loosely and weakly from the northwest this morning and this has provided a highway for the Kansas storms to move southeast across part but not all of northern Oklahoma.   This flow should change to more of a westerly flow for the next few days but the stronger trough aloft will still push the boundary southward into northern Oklahoma by late Thursday night and Friday morning with the increasing storm chances.   Before this occurs, most data also support a continued warming trend and a better influx of low level moisture from the Gulf by Thursday into Friday.   This means temperature heat index values will be increasing to near 100 around the metro and slightly higher across southeastern Oklahoma during this late week period.

The weekend will feature muggy and warm weather with periodic chances for storms as long as the boundary remains intact and near northern Oklahoma.   Most data continue to keep the storm chances intact through the weekend but I’m reminded the data last week also had a decent shot a few days out and then fizzled.   We’re already at the 60% pop for Friday and Saturday and I’ll not make any changes to those numbers today.