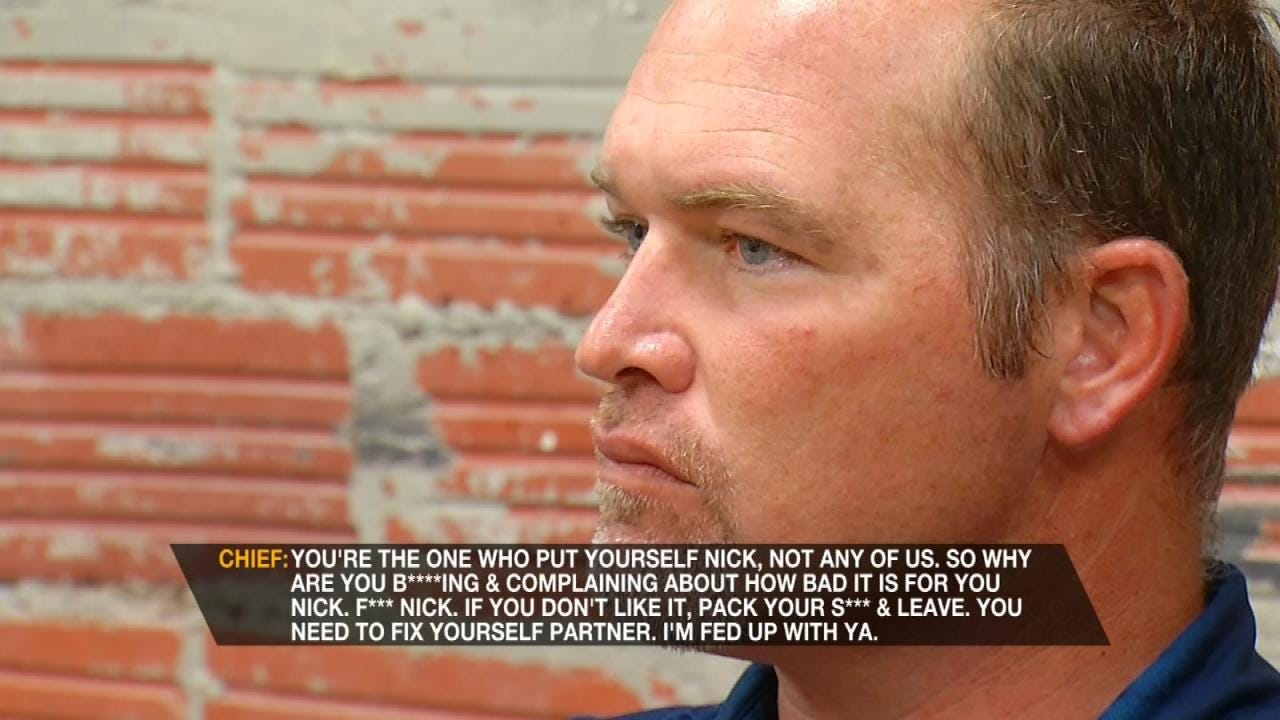 A Tulsa firefighter wants the mayor to immediately suspend Fire Chief Ray Driskell and launch an investigation into Driskell's actions.

Captain Nick Gillespie said this started last July after he'd been on the scene of a fire for four hours and it was pretty much out and the danger had passed.

He said he'd been up 23 hours and sat down in the bucket and rested his chin on his chest for a minute. He said another firefighter took a picture and it made its way to Chief Driskell.

Gillespie said the fire chief demoted him and put him on administrative duties for the next three and a half months.

Gillespie said he sent a letter to Driskell in October, asking for a meeting, to find out what he could do to get back in the field.

He recorded that meeting, which lasted about 25 minutes.

"You're the one who put yourself Nick, not any of us,” the chief said, in the audio recording. “So, why are you b----ing and complaining about how bad it is for you, Nick. F---, Nick. If you don't like it, pack your s--- and leave. You need to fix yourself, partner. I'm fed up with ya."

Driskell told Gillespie he wasn't talking to him as a chief to a firefighter, but as Ray to Nick and expresses frustration at Gillespie's actions.

"But, you're a captain, g--d---,” the chief went on to say. “You should lead that group and let them know even though you are tired you're still pushing, and go to the full extent, not sit down in the g--d--- bucket."

The chief told Gillespie he'll stay on the administrative job until he says otherwise and also said he should be grateful to still have a job.

Driskell said he was sick of seeing Gillespie in front of him.

“You better be f---ing afraid partner, because I'm not afraid of you and I'll fire your a-- in a heartbeat,” the chief continued. “I know you probably want to tear into my a-- and partner, I wish you'd try."

Gillespie filed a grievance, arguing the discipline was out of line with the infraction. That is making its way through the arbitration process.

“If this had been the city budget manager or any other department in the city and that manager used the same conduct, language and vulgarity, they'd be fired on the spot,” said attorney Joel LaCourse. “Chief Driskell does not get to operate under a different standard."

News On 6’s Lori Fullbright called the chief's office and the mayor's office. They both said they can't comment because it involves a personnel issue. She also called the firefighter's union who sent the statement below.