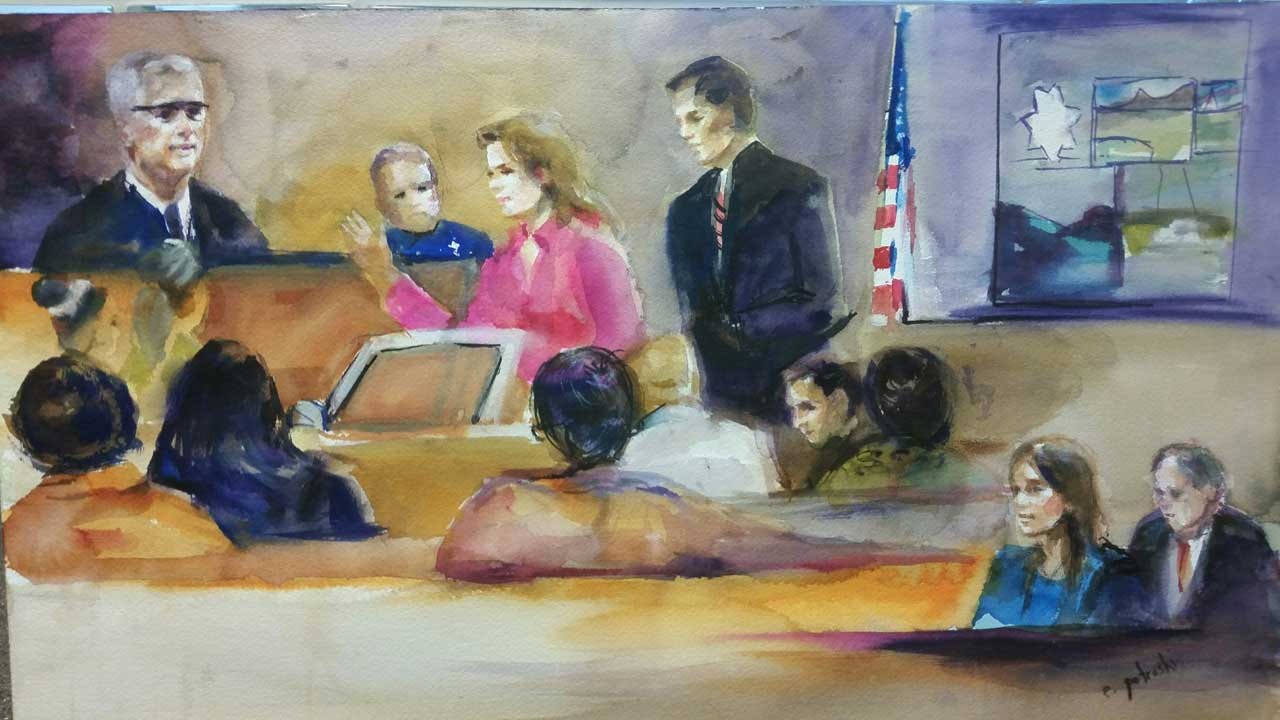 Day three of the Betty Shelby manslaughter trial began with the choosing of the jury. The pool was narrowed down from 70 to 12 jurors and two alternates.

After that, the process moved quickly; the State and the defense gave both their opening statements before lunch.

At 1:30, Tulsa Police Officer Tyler Turnbough, the first witness for the state was called. Turnbough was the first officer to respond to Shelby's back up on September 16, 2017.

Turnbough – on the force since 2009 – said the night started out normal; he had dinner and then sat in his patrol car writing up a report when he heard Shelby's first call - a routine abandoned car check.

It wasn't until a few minutes later that Turnbough became alarmed, saying he heard Shelby say, "Hold traffic, I've got a guy not showing me his hands."

He turned on his lights and sirens and was at the scene in less than a minute, he said.

When he got there, Turnbough said it was obvious that something had happened before he arrived that caused her some concern.

Turnbough said Shelby had her gun pointed at him, walking behind him. Crutcher was walking away from Shelby with his hands up.

Turnbough got out of the car and jogged to Shelby's left side, pulled out his Taser and said aloud to Shelby, "I've got my Taser."

He said he thinks Shelby acknowledged him, but he wasn't 100 percent sure.

He said Crutcher continued to walk away, seemingly on a mission to get to the driver's side of his car. Turnbough said his behavior made him extremely uncomfortable and uneasy.

Once Crutcher was at his driver's side window, he turned to face the officers, then reached inside the window, which was rolled halfway down, with his left hand.

At that point, Turnbough said he fired his Taser, which made a loud popping noise. He said he saw Crutcher bleeding so he dropped his Taser.

Crutcher fell to the ground.

Shelby admitted she had shot him. Turnbough said that was when he realized the loud popping noise he heard had most likely been the gunshot.

The state's first piece of evidence was the dashcam and helicopter video from the night of the incident.

The defense brought out an actual replica of Crutcher's Lincoln Navigator door.

The window has been a topic of debate since a few days after the shooting, when the Crutcher family's attorneys printed large pictures from the helicopter video claiming they showed the window was rolled up. Both sides now agree the window was halfway down during the incident.

The next witnesses called to the stand were officers Jason Roy and Sandra Dunn.

Roy arrived on scene directly after Turnbough; Dunn arrived right after that. Their accounts were largely similar to Turnbough's.

At one point, the defense asked Roy what he would have done if he had been in Shelby's shoes. Knowing what he knows now, would he have fired his weapon? He answered "yes."

Both Turnbough and Roy said that at no point did Crutcher approach them, move to assault them or swing at them. They said he was just not following any commands whatsoever before reaching into the car.

Next on the stand was Officer Michael Richert. He was the helicopter pilot the night of the incident, possibly most well-known for his line, "That looks like a bad dude."

The state asked Richert about the line, he said all he meant by that was that it looked like a bad situation. He said in his 12 years on the force, he's never seen someone walk away from an armed officer, and for that reason, he knew the situation was bad.

The state noted that he could not hear anything going on down on the ground, he could only see it.

The next witness was Dean Montgomery, a member of TPD's Critical Response Team. Montgomery has been on the force for 19 years.

He said he responded to the scene when he heard Shelby asking for additional back-up.

Montgomery said when he got there, Shelby was "very humble, aware of her surroundings, aware of what just transpired."

Once they arrived back at the Gilcrease Division, Montgomery said Shelby kept asking, "Why didn't he listen to my commands?" He said, at that point, Shelby was visibly upset and became anxious and nervous.

Montgomery said that's normal behavior for someone who has just been in a critical situation like she had.

The state then asked, "Don't you think those are the behavior traits of someone who has done something wrong?"

Montgomery responded, "I don't have an answer for that."

The last witness of the day was Lacy Lansdown, who wrote the original report of the incident. She also marked the bullet's shell casing at the scene of the incident and watched another officer mark the Taser.

Witness questioning will continue Thursday. The state has about 18 more witnesses on the list, but they don't have to call all of them to the stand.