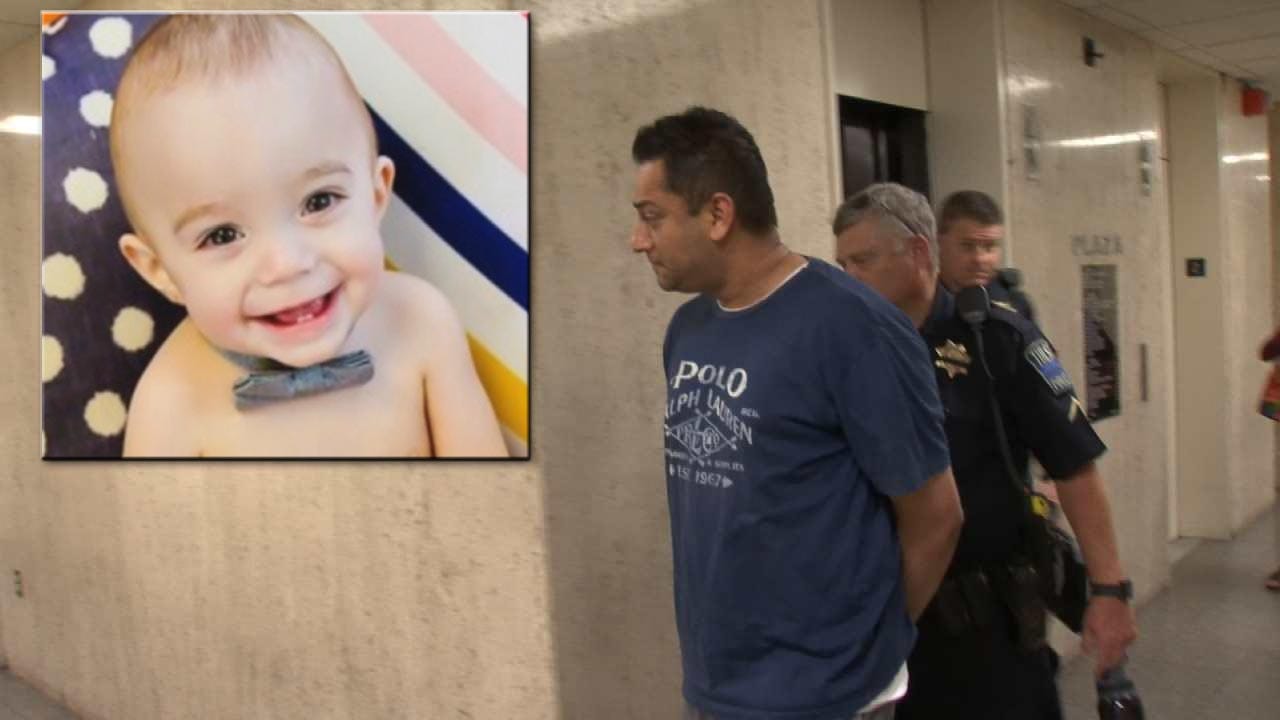 According to an affidavit filed against a Tulsa dentist, his girlfriend’s baby was in his sole care prior to the time the boy began exhibiting signs of blunt force trauma before dying.

Franklin was arrested in South Tulsa on Wednesday and is being held on a first-degree murder complaint. He practices dentistry in Tulsa at Signature Smiles on 65th and Yale.

The incident occurred at his girlfriend’s home in OKC, the affidavit says.

Doctors at OKC's Mercy Hospital said when the child was brought in, they discovered injuries consistent with abuse and called police to investigate.

The details the mother gave in the initial police report filed in the case differ from those in the affidavit, documents show.

According to the police report made at first contact with the couple, when police questioned Franklin's girlfriend about 4 a.m. on Sunday, she said the boy had been at his aunt's home and returned at 6 p.m. the night before, then he began acting fussy and wouldn't take a bottle.

The mother said that by 2 a.m. on Sunday, she noticed the baby was "sleeping with his eyes open and making a loud snore sound," she couldn't wake him and his body was limp.

The mother said she "called 911 but stated she hung up because 'we live in a brand new subdivision where the roads aren't on the map yet,'" the report says.

According to the police report, in a separate interview Franklin corroborated the mother's story, stating the baby had been at his aunt's home, returned fussy and went to bed while the two adults continued working on home remodeling projects until about 12:30 a.m. before going to sleep themselves.

Around 2 a.m., Franklin said, the baby "was making weird sounds" so they turned on the light, "started freaking out" and rushed to the hospital.

The officer also asked the mother if there had been any recent accidents. The mother explained a cut under the baby's eye was from falling two days before while carrying a glass object and she took him to the hospital, the report says. She also reportedly said the day after that, he fell down three steps on the staircase at home and hit his head on a wall.

"I've seen him have some spills and tumbles, but the small tumble down three carpeted steps wasn't bad," she told the officer, according to the report.

The police officer then contacted the OKCPD crimes against children unit, which conducted its own interviews.

When interviewed about an hour later by a detective with the OKCPD crimes against children unit, neither the mother nor Franklin could give doctors a reason why the child was in the state he was, according to the affidavit filed by that detective.

The affidavit says Lincoln was diagnosed with a skull fracture and subdural hematoma and transferred to pediatric ICU at Children’s Hospital in Tulsa.

“When the victim arrived at Children’s Hospital... [a doctor, the medical director of the child abuse and neglect unit] said there were petechiae [small red or purple spots caused by bleeding into the skin] near the right rear of the victim’s skull and was most probably the location of impact,” the affidavit says. “[The doctor] stated the trauma was of a blunt force nature and was very severe. [The doctor] said the victim had retinal hemorrhages in his eyes, severe swelling in his brain, along with severe trauma to his brain. The skull fracture demonstrated a high degree of force to cross multiple suture lines through multiple bones. [The doctor] said the injuries would have caused the victim to be symptomatic soon after the injuries.”

Crimes against children detectives interviewed the mother again, and that time, she said she had surveillance cameras in her home and the child was alone with Franklin downstairs while she was upstairs, the affidavit says.

She says she heard a loud “thud,” which Franklin explained to her was him throwing a ball to the puppy, according to the affidavit.

The detective said the medical examiner confirmed the diagnosis given by the doctor at Children’s Hospital.

“Bert Franklin’s account of the noise heard [by the mother] is inconsistent,” the affidavit says. “He was the sole care provider for the time frame prior to being symptomatic.”

The document says Franklin was known for exhibiting controlling behavior and made statements in the past about his hatred for the baby’s father, even threatening to kill him, “skin him in Bricktown,” and cut off his genitals.

As we reported on Wednesday, Franklin, who lives in Tulsa, is married with four children.

The affidavit says Franklin and the deceased baby’s mother had been in a relationship for a year, “without his wife knowing about [his girlfriend] or [his girlfriend] knowing he was actually having an affair with her.”

News On 6 previously reported a story on little Lincoln Lewis in November.

He was born months prematurely and had special needs. He had to wear a cranial helmet and an artist decorated it for him to make it more personal.