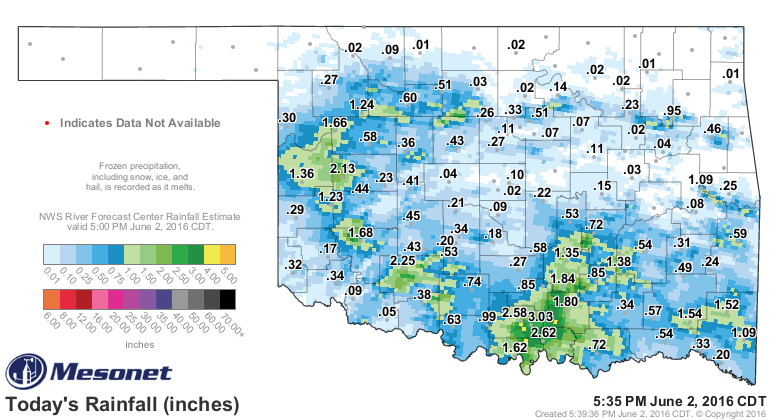 After another round of showers with some embedded locally heavier storms today, some folks have had a good soaking while others have missed out as you can see on the 24 hour rainfall map as of this writing, courtesy of the OK Mesonet.  Showers and locally embedded storms will continue off and on for tonight and again into the day Friday.  Interestingly, the activity is generally moving from E-W which is rather unusual and due to a circulation feature aloft located in TX.  The counter clockwise circulation around that slow moving system is keeping us with considerable cloud cover and chances of showers/storms.

Notice the location of the system as of mid-day today at the 500 mb level, or an elevation of about 18,000’.  The next map shows the projected location of that feature Friday evening and as you can see it has not moved much.  That will keep us on the northern fringe of its influence which means even better chances of showers/storms for the more southern counties of OK.

By Saturday evening, it has dropped further southward and weakened allowing a stronger northerly flow aloft to move into OK.  That will help push a stronger surface front through the state which in turn will bring drier air for Sunday and into much of next week.

For that reason, am showing the 3 day QPF map since any chance of rain will have ended by Saturday night and the rest of the forecast looks dry as you can see on our forecast page.  At any rate, the QPF map again shows a distinct N/S gradient in rainfall across OK with the potential for heavy rains for the southern counties and especially into TX and along the Gulf Coast.

As mentioned, we will keep cloudy skies and chances of showers/storms for Friday which also means temperatures will be close to what we had today.  Light E to NE winds will give way to a more N wind on Saturday and a brisk N wind on Sunday.  Partly cloudy skies for Saturday but still with a chance of showers/storms, particularly late in the day as the stronger surface front moves through the state followed by the drier air for Sunday into early next week.

That means relatively mild nights for the weekend into next week, but with all the sunshine our days will be heating up.  At least we will have northerly winds to start the week but as the winds return to a southerly direction later in the week, that will make our nights warmer, our days hotter, and the humidity levels possibly reaching the uncomfortable level.

As a side note, we have yet to reach 90 degrees this year and it looks like we will not make 90 till this time next week.  That will be the latest 90 degree temperature since Jun 16 of 1993.