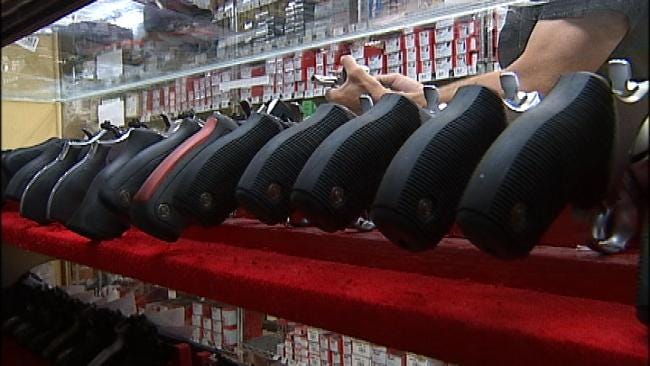 A committee of state lawmakers has given preliminary approval to legislation that allows Oklahomans to openly carry guns without any training or background checks.

The House Conference Committee on Public Safety on Wednesday passed the bill by Republican Rep. Jeff Coody of Grandfield. Coody says he must get signatures from at least seven members of the committee before a hearing is scheduled on the House floor.

The bill would allow adults over 21 and without a felony conviction to openly carry firearms without a license, training or background checks.

Several business, government and education groups, including the NBA's Oklahoma City Thunder, have expressed opposition to the measure. Cooksey says their concerns are "overblown" and firearms will not be allowed where they are specifically prohibited.

Craig Day In Seminole, Oklahoma, a lot of people are getting into the holiday spirit. It’s the time of year when the sun goes down, the lights come on at Magnolia Park. Visitors at Seminole's Snowman Wonderland say this holiday light display is a special experience.

News 9 Join Dr. Larry Bookman and Dr. John Armitage as they talk with Phil Maytubby of the Oklahoma City-County Health Department about the latest in the fight against COVID-19 and the Omicron variant.

CBS News COVID-19 infections are quickly rising in the U.S. with more than 100,000 cases per day and 1,100 deaths as the Omicron variant continues to spread. Skyler Henry reports on the day's developments from Washington.

Drake Johnson The Oklahoma State Bureau of Investigation (OSBI) is asking for the public's help in locating a missing woman from Haskell. Authorities said 43-year-old Tamera Lynn Banks, also known as Tammy or Elle, was last seen at her residence in Haskell off Highway 64 on November 15, 2021.

Grant Stephens Tulsa Police say there may be more victims connected to a string of rapes and sexual assaults. The suspect, James Townes, was arrested in September.
View More Stories