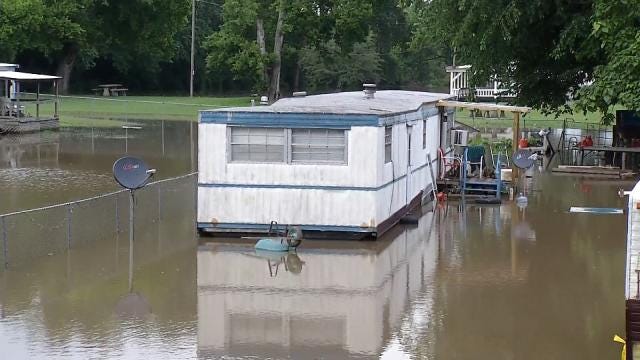 The rain is gone, but the floodwaters are still rising at Webbers Falls in Muskogee County where more is now being released from the Fort Gibson Dam.

The U.S. Corps of Engineers had been hoping to hold off on letting water out, but the water release can't be put off any longer.

As water is released, it is quickly flooding the area below, and it's threatening to flood out the community of Webbers Falls fast, too.

Five mobile homes already are surrounded by water. The flooding isn't necessarily from the waters released from the dam. The area already was dealing with excess water from days and days of rain, and last night didn't help.

Mickey Durrett says he heard a propane tank hit the house around 3 a.m. He thought someone was outside, but he saw his tank floating in the high water, which now is just an inch and a half from getting inside.

The release added to the flash flooding as recent as Friday. Webber Falls already is seeing flooding. Since the ground already is soaked, that extra rainwater is continued runoff.

"The Corps of Engineers has done a fantastic job of managing the flooding, all things considered,” Muskogee County Comissioner Ken Doke said. “I think now they are just having to play the hand they're dealt. It's not anything that you can blame anyone for, we've just had a tremendous amount of rain, more water than we've had in years. And unfortunately, this is just something that's part of the situation."

The corps will be filling sand bags to hand out to people on Sunday. The plan is to distribute about 10,000 of those sandbags in Webber Falls. Additional bags will be available at the Muskogee County District 1 Barn.