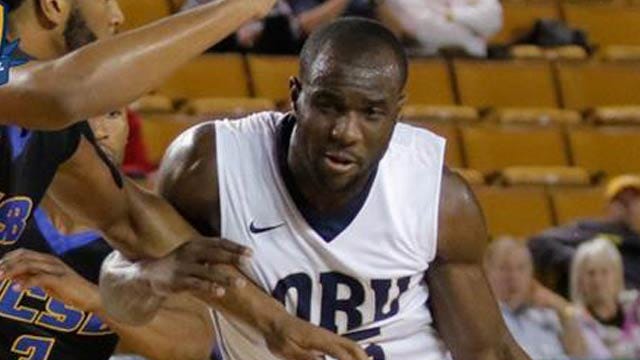 The Oral Roberts men's basketball team hosted UC Santa Barbara in round one of the CBI, resulting in a 91-87 Golden Eagles victory.

Both teams were scoreless for the first two minutes, until ORU's Denell Henderson posted two with a hook shot in the paint. Obi Emegano then attempted to get something started for his team after knocking down a three.

ORU lost its lead halfway through the half, but a couple of back-to-back buckets from Emegano helped the Golden Eagles reclaim a one-point lead (14-13).

Oral Roberts controlled the half, but couldn't establish a comfortable advantage. Every time the Golden Eagles scored, the Gauchos answered. The game was tied up for the second time by the 3:31 mark (32-all). At this point, Emegano led all-scorers with 17, and ORU had improved its field percentage to 54.5 percent and it's three-point percentage to 60.

The Golden Eagles stole a 68-62 lead halfway through the final with a three from Aaron Young. Emegano fed off his energy, sinking a deep one shortly after.

Both teams went back-and-forth exchanging buckets, but free throws down the stretch landed ORU a 91-87 victory.

ORU will take on Loyola in round two. Game time and date are TBD.