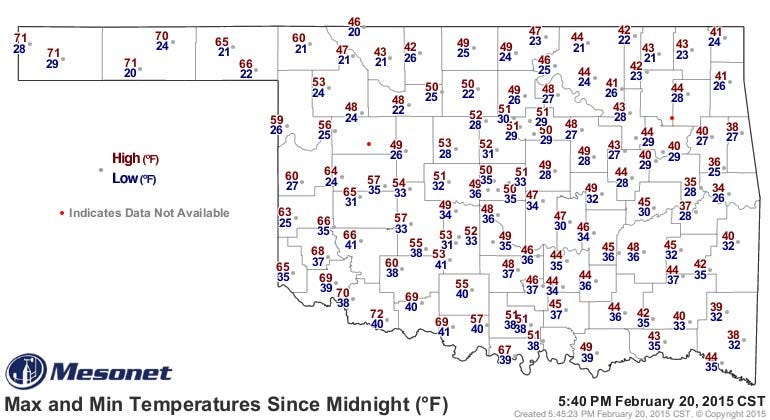 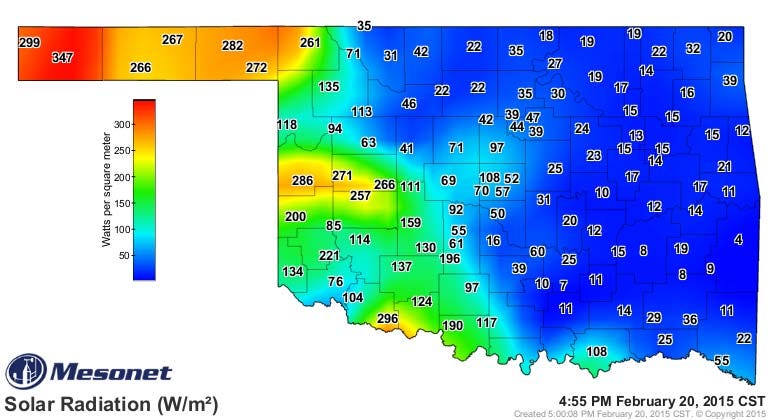 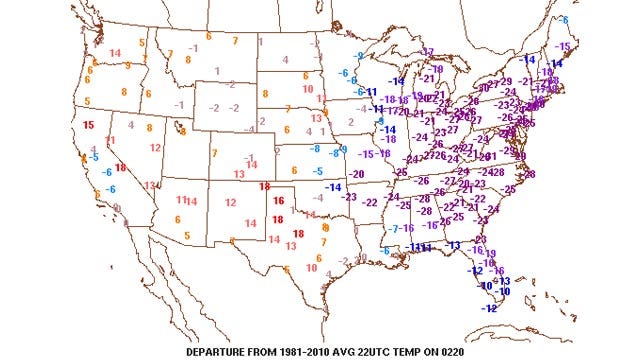 Once again, another chilly day for most of the state - except for the far western counties - as you can see on the first map, courtesy of the OK Mesonet.

The second map illustrates the main reason why, sunshine, or in our case the lack thereof.

The OK Mesonet maintains not only temperature, wind, and precipitation sensors all across our state, but also keeps track of solar radiation, and that second map shows basically where the sun was shining as of late this afternoon and where it wasn't.

A normal daytime high here in Tulsa at this time of year would be 55, so you can see the impact of those clouds and the chilly SE breeze which kept us 10-15 degrees below normal.

Notice the third map, which shows the nation-wide departure from normal as of late this afternoon. Clearly the coldest air is east of us where records are being set, but notice that temperatures to our NW are actually running much warmer than normal.

That is the air that will initially be tapped as our winds shift to the north overnight tonight and will be on the order of 10-15 mph much of Saturday. The system responsible for the wind shift will also bring some widespread rain, drizzle, showers and perhaps even some thunder for tonight ending from the west first thing in the morning Saturday.

We should get some breaks in the clouds by afternoon as the dry slot aloft moves overhead allowing temperatures to reach the upper 40s, or even lower 50s for some locations, despite a brisk northerly wind.

That brief break will be short lived though as much colder air now located further north in Canada will be surging southward so that Sunday and Monday are not expected to get above freezing.

Also, strong northerly winds on Sunday will be on the order of 20 mph with much stronger gusts bringing wind chill values down into the teens or even single digits at times. The winds will not be quite as strong on Monday, but it will still be brutally cold with morning lows in the teens and daytime highs in the 20s to near 30 at best.

Not only that, but sunshine will be hard to come by after the brief break Saturday afternoon. Cloudy skies will be the general rule for Sun & Mon and along with the clouds and the cold comes a chance of some wintry precipitation.

Light snow or flurries will be possible just about anytime both days but amounts should be light with most of what falls primarily over far W OK or the more southern counties.

Right now Tuesday and Wednesday look to provide a brief break with at least some sunshine, but another storm system is still headed our way later in the week and perhaps into that following weekend.

The Tue/Wed time frame will also see at least some moderation in temperatures with highs back into the 40s which is still below normal.

Then, more cold air will be surging our way along with another chance of wintry precipitation. The longer range guidance continues to exhibit little in the way of consistency except that it will be cold for later next week and into the weekend.

Earlier in the week there were indications of a major snow storm during that time frame, but those solutions have flipped with the more recent data runs and will likely flip several more times before settling on a more consistent solution.

Keep in mind, the system we are tracking that would be the trouble maker for that time frame is now located way out in the Pacific where data initialization is often suspect and can lead to large downstream forecast errors.

With that in mind, you will see on our forecast page that we are being rather conservative with respect to the winter weather potential later next week as the uncertainties are just too great to have any real confidence in a snow or no snow forecast.