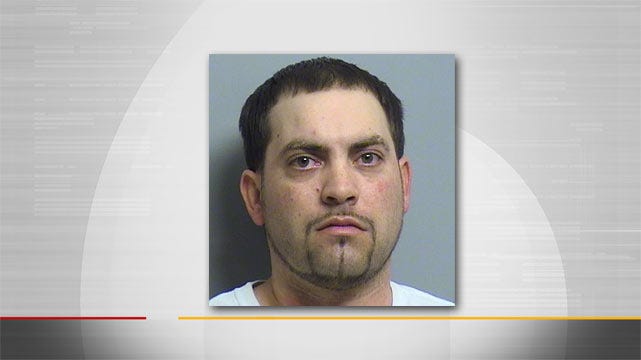 A Jenks caretaker has been arrested for abusing his mentally handicapped brother after police reportedly found the man locked out of the home and living in squalor alongside a dog in an unheated garage.

Henry Nelson Bailey, 35, has been jailed on complaints of abuse by caretaker and domestic abuse.

Jenks police said they were dispatched to a Subway restaurant on Wednesday night, where they met with Bailey's brother, who told them the two had gotten into an argument that turned violent. An arrest report says the brother had redness on his jaw where he said Bailey hit him. The man said he then ran away to take refuge at Subway.

The man said Bailey was upset with him for breaking into the house and stealing food. He denied breaking into the house, and told officers he was hungry because Bailey doesn't always feed him, the report says. He also told officers he stays in the detached garage at the residence, shares the space with a dog, and the only heat source is a space heater.

JPD said they asked the man if he liked living with his brother and he told them he didn't. When an officer asked if the man wanted to come with them to talk to Bailey, he refused and told them he would wait at Subway, the report says.

When police arrived at Bailey's home and inspected the garage, the investigating officer said he found a twin-sized bed with only a sheet and thin blanket. The officer said when he entered, he was “overcome with the scent of urine and feces,” according to the report. The officer also reportedly found a half-full, 5-gallon bucket next to the bed that was used as a makeshift toilet, and he found dog feces all over the floor.

When questioned further, Bailey told the officer that his brother was “allowed” to use the restroom and shower, but only when he is home, otherwise he is locked out because “[name redacted] will go inside the residence and eat all the food and break things,” the report says.

Bailey also reportedly told officers that his brother does not have a bedroom in the home.

“[Bailey] stated that his fiancée and their two sons live in the residence so there is no bedroom inside the residence. However, when officers spoke with [the fiancée] later, she advised that she does not live at the residence and [Bailey] lives there by himself… she has her own house and she only visits," the report says.

Officers called the Department of Human Services to investigate on behalf of the brother, and Bailey was arrested. He is in the Tulsa County jail in lieu of $30,000.