Dick Faurot's Weather Blog: Think It's Been Dreary Lately? We Set A Record For December 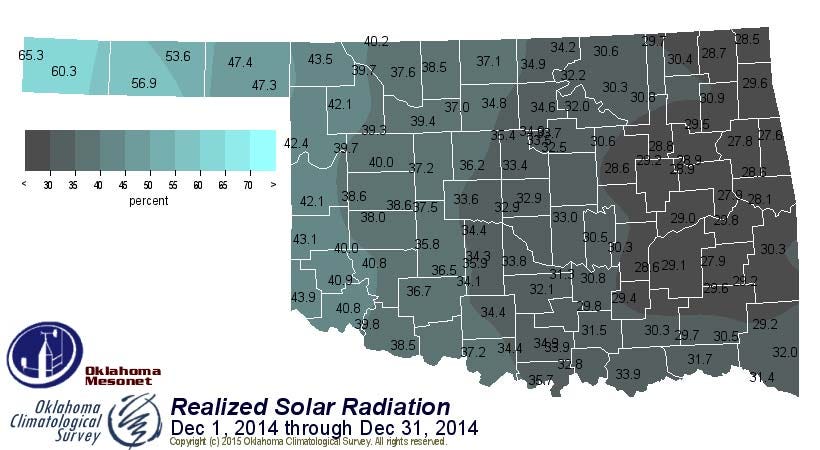 Despite the cold, the sunshine yesterday and today has made the weather outside a little more tolerable.

If you think we have been unusually dreary recently, you are correct. On a scale of 0-10, with zero representing clear conditions for the daylight hours and 10 overcast conditions, the last time we had a zero – i.e. clear skies all day - was Nov 18.

Since then, we've only had one day in December that even managed a 3, which would translate to mostly sunny, all the rest were pretty much cloudy or mostly cloudy and the month averaged an 8.

As mentioned several days ago, we received less than half our normal sunshine during December and we were not the only ones. In fact, according to the good folks at the OK Climate Survey, statewide this past December was the least sunny on record since the OK Mesonet was established back in 1994. Notice the accompanying map.

One of the contributing factors for the lack of sunshine was the absence of a strong enough system, both at the surface and aloft, to completely scour out the moisture at all levels.

That finally happened with the strong cold front that came through early yesterday morning and the result was lots of sunshine for most of the day and, except for a very few high level cirrus clouds, pretty much clear conditions today.

The scouring out of the clouds due to the drier air also means colder nights, and that was certainly the case this morning.

Notice the max/min temperature map for today, courtesy of the OK Mesonet. You have to go back to that record setting cold blast we experienced in November for the last time we were that cold to start a day.

At least the sunshine, together with a southerly breeze, did help temperatures moderate rather nicely this afternoon.

Now that we have some sunshine, the next question is how long will it stick around?

Well, here is the good news: the latest and greatest guidance is strongly suggesting more sunshine than clouds going into the day Friday with some mid and high level clouds around from time to time. The flip side of that though is that the drier air in place is also much colder air, and after a brief warm-up on Tuesday, we are expecting the coldest conditions so far this season for the Wed/Thu time frame.

Southerly winds through the night tonight should keep us pretty much in the mid-upper 20s to start the day Tuesday. However, another strong cold front will arrive during the morning hours followed by increasing northerly winds, but the real deal cold air will not be arriving till that evening or overnight.

Temperatures should still climb well into the 30s on Tuesday before the bottom falls out that night and for Wednesday.

Single digits to lower teens are expected for Wednesday morning followed by afternoon highs struggling to make it to the 20 degree mark.

Thursday morning will see widespread single digits and afternoon highs struggling to make it to the freezing mark.

Friday will also be cold with morning lows near 20 and daytime highs only near 30. In fact, much below normal temperatures will be the general rule right on through the coming weekend.

Along with the colder weather comes gusty northerly winds, particularly for Wednesday when winds will be gusting to near 30 mph, putting wind chill values in the single digits if not below zero at times.

That is dangerously cold and extra caution with regard to outdoor activities is certainly advised.

At least the extra sunshine will reduce the gloom factor despite the cold. It also means our chances of any wintry precipitation are pretty much in the slim to none category right on into the coming weekend.

Having said that, cannot rule out a brief flurry on Wed with the gusty winds, very cold air in place, and at least some cloud cover.

However, notice the 5 day QPF map which has us high and dry through this coming Saturday. In other words, no measurable precipitation is foreseen during that time frame, but that does not completely rule out a brief flurry or two.

Beyond that time frame, the longer range guidance has us on the fringe of some potential precipitation for the Sun/Mon time frame, but right now that does not appear to be a big deal.

The complete forecast is on our forecast page.