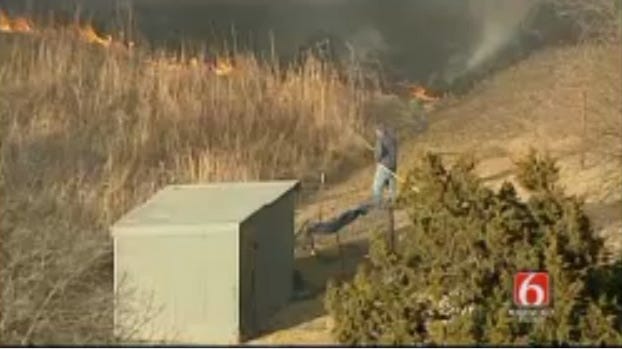 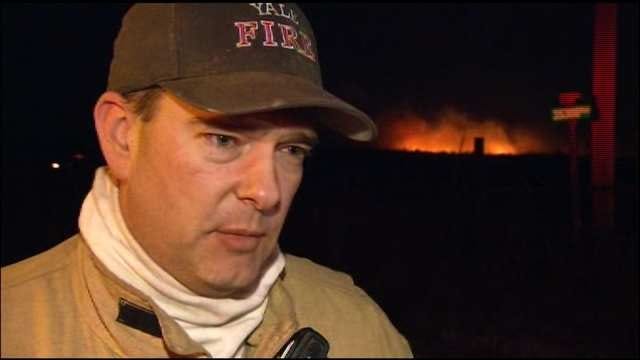 A wildfire that burned in Hallett near North 3540 Road and East 0570 Road, grew out of control due to the high winds, and almost destroyed houses. One man even stood in his backyard with a garden hose, trying to hold off the fire, until help finally arrived.

"Firefighters here with these high winds, they're battling this fire. It's moving at about 30 to 35 miles per hour," said Osage SkyNews 6 pilot, Will Kavanagh.

Over a dozen departments were on the scene as the fire continued to burn hours after it started, in Pawnee County. There are many homes and structures in the path of the fire, and that is their main concern.

The fire took place in an area with no county roads, meaning firefighters had to maneuver through the open fields to get to the flames.

Derek Sosbee with the Yale Fire Department, said, "There's a lot of timbers, it breaks out into an open pasture and before we can get around the timbers it's through that pasture and into another timber. There's lots of valleys, seems, ravines, it's real rocky in these areas, so a lot of times these trucks can't get to it."

That wasn't the only fire of the day, as Osage SkyNews 6 was over a fire burning along the west side Highway 169 near 81st Street. Several acres burned, but we didn't spot any businesses in danger. Crews contained the fire in a wooded area just off the highway.