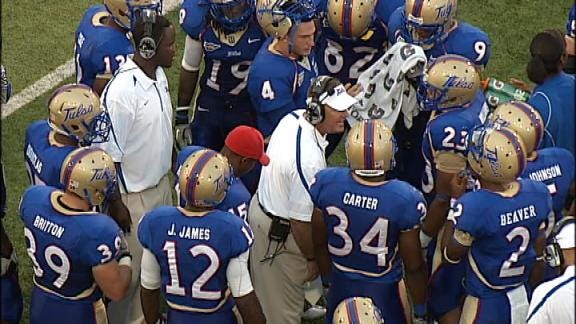 Johnson is in his fourth season with the Hurricane, coming from Colorado where he spent two seasons as the offensive line coach. At Tulsa, Johnson has had five offensive linemen earn all-conference honors and has seen a Tulsa offense rank among the nation's best for fewest quarterback sacks and TFLs over the last two seasons.

"Certainly, Denver has vast offensive experience and knowledge in his many years as an offensive coach and head coach," Blankenship said. "I am extremely comfortable with Denver's philosophy and his leadership."

Bitson was an All-America receiver for the Golden Hurricane in 1988 and 1989. He returned for his second coaching stint with the Hurricane prior to the 2012 campaign. In two seasons, Tulsa running backs have rushed for 4,796 yards and 49 touchdowns, while Trey Watts earned first-team all-Conference USA honors in 2013.

David Johnson returned to Tulsa last year as a graduate assistant coach. He was the starting quarterback for the Hurricane in 2008 as a senior, throwing for 4,059 yards and 46 touchdowns in 14 games.

The younger Blankenship has spent the past 11 years coaching in the prep ranks in Oklahoma. He spent seven years as an assistant coach at Tulsa Union High School, one year for the NOAH home-school team and the last three seasons as the head coach at Muskogee High School.

He completed his playing career at Eastern Washington University in 2002 as a second-team All-American. Blankenship threw for 3,243 yards, 294.8 yards per game and 30 TDs with a passing efficiency of 145.3 his senior season and was named the Big Sky Conference Offensive MVP.