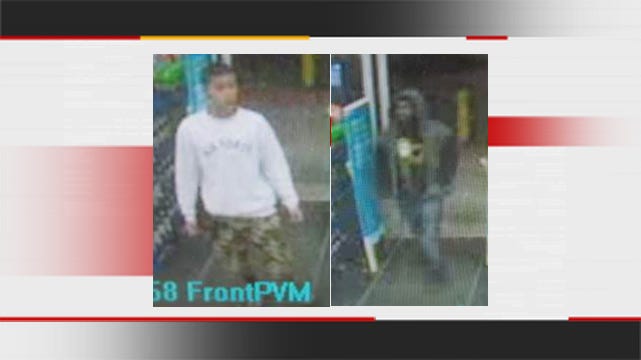 Tulsa police are looking for two men accused of multiple robberies and a shooting.

Reports say the first robbery occurred on January 12, just before 8 p.m. Officials say one of the suspects grabbed a woman from behind as she was getting into her car and took her purse.

The second robbery is said to have happened the next day outside of the same Walgreens, just after 8 p.m.

Police say the suspects approached a man walking towards the Lewiston Apartments. One of them hit the victim's cell phone out of his hand while the second held the man at gunpoint demanding money.

The suspects, reportedly, made the victim take them to his apartment. When they arrived, the victim's roommate refused to open the door. The suspects are said to have fired a shot while running away.

The two men are also accused of committing a third robbery later the same night. Police say the men walked inside a garage and demanded money from the victim. When he told them he had none they attempted to shoot him but the gun misfired.

Police say the victim then ran inside his home but was shot in the torso after the men fired a second time then ran away.

The victim was taken to a hospital.

Anyone with any information on the two men is asked to call Crime Stoppers at 918-596-COPS.